In this white paper an LTE antenna is designed for use in a mobile phone, using a dual-port configuration. Using FEKO, the antenna is also optimized for minimal reflection co-efficient at both ports and cross-coupling between the ports as low as possible.

4G/LTE provides a comprehensive and secure all-IP based mobile broadband solution to all kinds of mobile communication devices.  WiMAX, HSPA+ and first-release Long Term Evolution (LTE) have been the dominant technologies in this market.  These technologies have been designed for channel bandwidths of 5 to 20 MHz (optionally up to 40 MHz) and offer peak data rates of ~ 100 MBit/S for high mobility devices and 1 GBit/s for low mobility devices.

Challenges that typically influence the design of an LTE antenna for a mobile device are:

A thorough investigation lead to the decision to use a dual-port antenna configuration for this design.  Dual-port antenna designs have the following advantages that are appealing to the current design [1]:

A novel design is proposed in the current work, featuring symmetric radiating elements to keep the radiation characteristics identical for both elements, while enhancing pattern diversity as mentioned above.

This performance is unfortunately not good enough as low correlation is required, while providing good impedance matching at the same time.  The current design is considered to be the correct topology, but has to be optimized for a good combination of low port-port isolation and input impedance matching.

The initial design was optimized in a two-step process:The initial design is optimized with a combination of the Particle Swarm Optimization (PSO) and Nelder-Mead (Simplex) methods that are available in FEKO.  PSO is a good optimization method for large unknown solution spaces, but takes a rather long time to converge.  The Simplex method converges much faster, but success of the method depends on a good starting point for the optimization.

When considering the surface current distribution in the case where both ports are excited, it becomes clear that although the two elements are connected, there is a clear voltage null between the two ports (isolation).

The phase of the two radiating element currents are also in opposite directions, indicating polarization diversity of the antenna.When considering the surface current distribution in the case where both ports are excited, it becomes clear that although the two elements are connected, there is a clear voltage null between the two ports (isolation).

Modern mobile phones tightly integrate many components, all of which influence the performance of the antenna.  It is with these effects in mind that the new antenna was integrated in a model of a phone to test the antenna’s performance in its operating environment.  The following phone structures were included in the model:

Both ports excited: The antenna acts as a dual-feed antenna for MIMO applications.The dual-port antenna in the phone was investigated in three typical modes of operation:

In all 3 cases the radiation characteristics of the antenna mounted on the phone proved satisfactory.

As a final test, the phone was simulated in operating state 1 (both ports excited) in close proximity to a human head, as the phone would typically be used.  The human head acts as a large dielectric load, which can significantly influence the radiation characteristics of the phone.  This simulation showed that for far-field radiation patterns both azimuth (horizontal) and elevation (vertical) scan patterns for the phone in proximity to a human head are still acceptable. 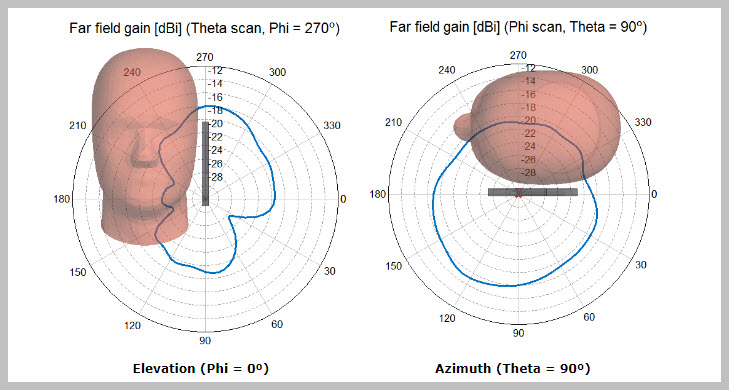 Phone radiation patterns in proximity of a human head

Does the phone result in acceptable energy absorption by users of the phone?

A common requirement for mobile phones is that energy dissipated in the head of the user has to be below certain limits.  These limits are referred to as the Specific Absorption Rate (SAR) of the phone and is measured in Watt per kilogram tissue (W/kg).  SAR is measured in three ways:

Different legislative bodies apply different limits that manufacturers of mobile phones have to adhere to, e.g.: 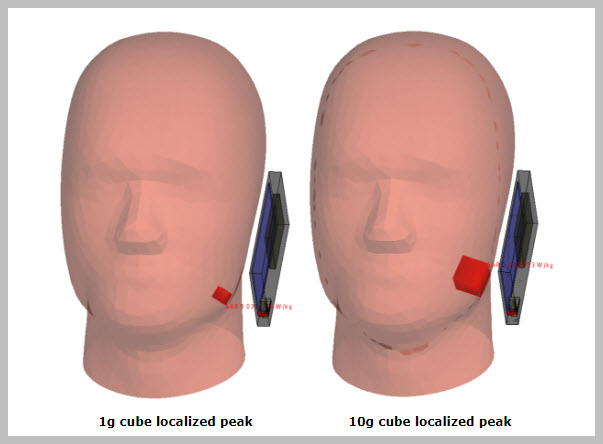 A novel design for a mobile antenna was presented here, satisfying all the requirements for modern mobile phones.  It was also demonstrated how FEKO was applied in the design process, from design prototyping and optimization to integration in a handset and compliance testing of the handset.

In summary, FEKO proved to be an invaluable tool through the entire design cycle of mobile phone antennas.