There is a lot of talk about “cloud computing” these days. But, what does that mean? And how does this new technology apply to computer-aided engineering (CAE)? More specifically, how does it work with HyperWorks applications? For example, suppose you currently run RADIOSS simulations on your local PC overnight, but you have a need to run several at once – or one large analysis that will take a few days. You could buy more (or bigger) computers, but that could take weeks and be very expensive. Instead, could you run these jobs “in the cloud”? The article will try to answer these questions and describe the role Altair is playing.

First, let’s agree on what the cloud is. It seems that everyone has his or her own idea of what “cloud” means. An online search for “cloud computing” will yield literally millions of hits. One can also find hundreds, if not thousands, of definitions. So, let’s start with a common vocabulary: 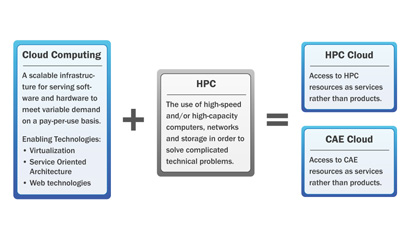 Although the industry hype sells the cloud as all new and revolutionary, these concepts have been around for a long time. Altair has been using, developing, investing, innovating and selling technology for building CAE clouds for more than 25 years. We just haven’t used the term “cloud” until recently. So, a CAE cloud is the evolved form of computing in our industry.

Historically, CAE users have had to learn more than they ever wanted to know about IT infrastructure. In addition to being engineers, they have become experts in CPU performance, memory bandwidth, disk space management, networking, and several different command line (or GUI) interfaces to different software applications.

If you listen to all the hype, it sounds like cloud computing solves all these problems. All that’s needed is a laptop with a browser and an Internet connection, and a customer can have access to all kinds of software remotely. It doesn’t require extra hardware, complicated systems, databases, etc. Best of all, the cloud is pay-as-you-go – CPU by the hour, storage by the gigabyte, etc.

Mostly, the cloud is a great thing for cloud providers. If a customer isn’t using all the CPU cycles on a machine, the idle capacity can be sold to another customer. Note that this works best when most customers don’t usually need an entire machine all to themselves. For many applications that consumers and businesses use every day, the cloud is a great fit.

Now, let’s take a look at CAE applications, where things get a bit more complicated.

CAE is not a lightweight process. Most CAE applications (especially FEA solvers) require high-performance computing. Many Altair customers report HPC utilization of 85 percent or higher. CAE engineers face the constant challenge of how to use limited resources most efficiently.

Here’s a typical example of the CAE “computing” process: 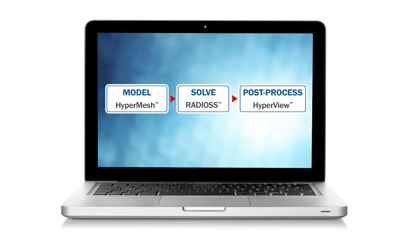 To start with, an engineer might run the “solve” part of this process on the local desktop computer. Hopefully it can run overnight, if not faster. If the model is too large, or the available compute resources are too small, there’s a problem. Either the model needs to be smaller, or additional resources are needed.

One solution is to run the analysis on the company server or cluster. Depending on how that’s configured, it might be called a private cloud.

Or, the analysis could be run on an outside public cloud. In either case, a CAE cloud needs to be an HPC cloud. 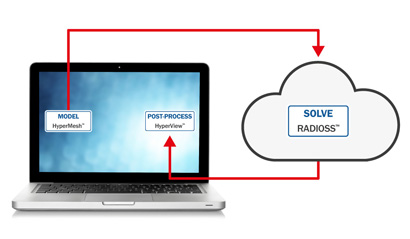 This is the idea behind Altair’s HyperWorks On-Demand: a CAE cloud, specifically for HyperWorks applications, that hides the complexity of the compute environment so that engineers can focus on solving engineering problems. 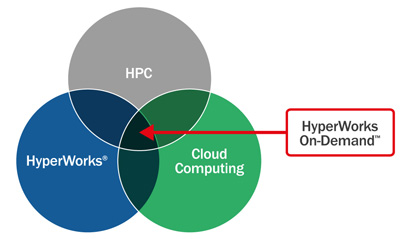 • A showcase for Altair products

• A competitive advantage for Altair customers

• A testbed for emerging technologies

Setting up a cloud environment to run HyperWorks applications presents several challenges. Most of the sophisticated tools in the HyperWorks family wouldn’t initially be considered “cloud-friendly.”

Altair is uniquely positioned to address these challenges. First, we have developed our own suite of HPC tools, which includes PBS Professional, PBS Analytics, Compute Manager, and PBS Desktop. These are key building blocks of HyperWorks On-Demand:

PBS Professional® is a very robust and mature workload manager. Originally developed at NASA Ames in the early 1990s, it now runs on many of the world’s largest HPC systems, including those in the Top500 . HyperWorks On-Demand leverages the power of PBS Professional for managing dynamic customer workloads.

PBS Analytics™ is a graphical Web-based accounting, analytics and reporting solution, which is used internally to manage customer accounting for HyperWorks On-Demand.

Compute Manager is a Web-based portal that is application aware. This is the user interface for HyperWorks On-Demand, which provides a simple, yet powerful, tool for users. Customers don’t have to deal with complicated scripts or command-line syntax. 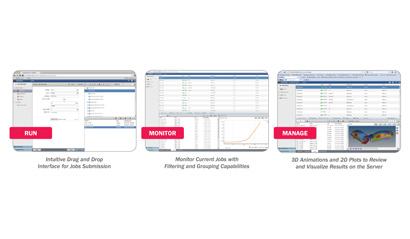 PBS Desktop, while not used with HyperWorks On-Demand, is a powerful tool that can be used as part of a private cloud. It is a Java client installed on the user’s local system, providing an alternative user interface to the same applications available through Compute Manager.

In addition to developing HPC tools (PBS Works), Altair also develops HPC applications (HyperWorks). This allows us to tackle another of the major challenges with cloud computing: application licensing. Traditional licensing mechanisms don’t work well in a cloud environment. Altair’s patented HyperWorks Unit (HWU) licensing model gives us the flexibility to offer unique payment methods for HyperWorks On-Demand. When running jobs on HyperWorks On-Demand, you can either purchase additional short-term HWUs or use the HWUs you already have.

The Future of HyperWorks On-Demand

In the not-too-distant future, the problem of moving huge amounts of data to or from the cloud will be solved.

The answer is both simple and complex: don’t move the data.

This means running the entire CAE process (modeling, analysis and post-processing) in the cloud. It’s already possible to do this in some cases. But as any HyperMesh user knows, post-processing of today’s complex models can be very graphics-intensive. It generally requires a high-speed 3D graphics card on a local workstation. Evolving remote visualization technology will soon allow a user to be able to post-process a full vehicle crash-test simulation, including animation and 3D rotation, from any Web browser! 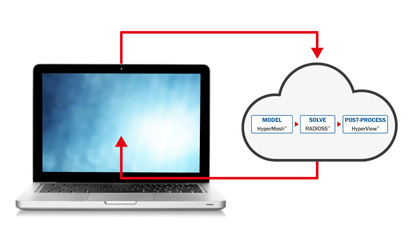 You’ll read more on this topic in the coming months; meanwhile, we’d love to hear from you the impact cloud computing is having on your day-by-day activities: what better way to do so than an online – or I should say “in the cloud” – discussion? Please leave your comments in the form below.

A Walk Through the Simulations Gallery