In this article, we will be looking at such trends as the impact of globalization and cloud-based services. How have oil and gas companies evolved and embraced new IT demands? What pressures are these companies feeling now and how will that impact the way they manage their IT infrastructure moving forward? These questions and their answers are driving Altair’s product development philosophy for all aspects of our business.

There is a common saying in the oil and gas industry that “the age of easy oil is over.”  Of course this refers to the need to recover today’s reserves in deeper and more remote locations than ever before.  To be economically viable, any potential project must undergo greater scrutiny, analysis and testing.  Coupled with the rapidly growing demand of the world’s existing and developing consumers, the risk of failure has maintained parity with reward for success, but each is measured in the billions of dollars.  Altair HyperWorks is enabling scientists and engineers to create better numerical models and simulations of the earth’s subsurface topology.  The success or failure of the recovery process in these complex formations is dependent on understanding how the structural and fluid mechanics of a rock formation will interact with the effects of the drilling, completion and production phases. 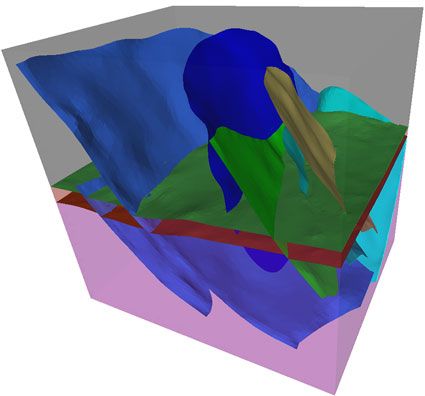 Predictably, the relationship between necessity and invention still holds, and the industry has continued to innovate and develop technology that allows it to search deeper, farther and more efficiently than ever before.  In addition to designing better tools to operate at extreme temperatures and pressures, HyperWorks customers are using HyperStudy to analyze how the statistical variations in materials and manufacturing process will affect the overall reliability of the system.  That translates to better products, less waste and reduced environmental impact.

Making the job easier is the computing world’s adherence to “Moore’s Law,” which has expanded beyond the scope of Intel co-founder Gordon Moore’s original reference to transistors on an integrated circuit to now say that general computing power will double every 18-24 months.

The confluence of more product demand, more extensive evaluations and more prolific computing power has yielded a veritable explosion of data.  While this applies to many other industries as well, it is especially true for the oil and gas (O/G) industry, which includes some of the first implementers of high-performance computing (HPC) as we know it today.  Consequently, the volumes of data are exploding.

Globalization is a multi-faceted phenomenon for the O/G industry.  For many industries, it refers to likelihood of supplies, products and consumers to have access to one another from anywhere in the world.  While this is true for the O/G industry as well, there is another aspect to globalization that is somewhat unique.  As reserves are discovered farther from traditional locations like the Middle East and the North Sea, someone has to go get them.  That means exploration in places like the west coast of Africa and in southeast Asia is becoming more prevalent.  Along with local laws mandating the use of indigenous resources, the efficiency gains associated with co-located teams have driven the O/G industry to establish IT infrastructure scattered all across the globe.  Sharing information and integrating those remote teams with other experts in the company present unique challenges here because, again, the datasets can be much larger than what the world’s WAN infrastructure can move efficiently.

To many in the general population, “the cloud” was launched with the release of Apple’s iOS 5, and while the features offered by that little blue icon were a good introduction to what cloud-based services could offer, they don’t really even scratch the surface of what is possible.  From the IT perspective, “the cloud” should essentially be an on-demand resource that is there when you need it.  When you don’t need it, whether it is there or not is immaterial.  For some cloud-based services like SalesForce.com, the whole business model relies on using remote resources.  In some cases, the IT group’s role is to manage the business’s integration with the “-as a Service” tools (Hardware as a Service, Software as a Service, Infrastructure as a Service, etc.).  Altair’s HyperWorks On Demand (HWOD) is an excellent example of how these Services can be leveraged by a customer who has periodic demands for hardware and software.  As a contrast to the more highly publicized offering from Amazon, HWOD caters specifically on the needs of the engineering community focused on numerical simulation.  In particular, clients are given access to dedicated machines instead of virtual machines, which can sometimes be insufficient for compute-intensive numerics.

Also interesting, though, is the development of a private cloud, which consists of shared on-demand resources controlled and administered by the company’s own IT department.

Altair has been focusing PBS Professional development on these matters for the past few years as our largest customers demand workload management solutions capable of supporting shared HPC resources with hundreds of thousands of CPU cores.  While the name “private cloud” is fairly new, the technology to schedule and manage these jobs across distributed resources has been in PBS Professional for much longer.

Some examples of critical aspects of numerical simulation are seismic processing, reservoir simulation, structural analysis and computational fluid dynamics (CFD).  Almost every aspect of the upstream O/G industry can be improved by better simulations from one or more of these.  In particular, Altair’s AcuSolve CFD product offers significant advantages in simulating vortex-induced motion and vibration of virtually all offshore structures and components.  Its scalability and fluid-structure interaction capabilities offer tremendous benefits over competing CFD products on the market today.

Comparison of sheared and uniform current in wake of straked riser

In addition, the variability of real-world conditions like subsurface structures, ocean currents and manufacturing has resulted in some groups introducing statistical analyses on top of the traditional nominal analysis.  Using HyperStudy in this way offers the additional benefits of including robustness and reliability in planning and product development.

Though globalization and the rising tide of cloud-based systems and services are new to the O/G industry’s IT infrastructure, there are innovative developments that make these advances very appealing.  As hardware performance continues to (roughly) follow Moore’s law, the users of HPC and other computing resources will continue to demand more and more capability.  By intelligently applying their own experience with HPC clusters and new remote visualization capabilities, O/G companies can confidently develop the energy resources on which the world continues to depend.

Rick Watkins
Regional Manager at Altair
Rick Watkins is the Altair Business Development Manager for the energy industry. He received his Bachelor of Science in Aerospace Engineering from MIT, and Master of Science in Aerospace Engineering from University of Texas at Austin. His professional interests include Enterprise Solutions with data analytics, numerical optimization and high-performance computing. He has spent the last 8 years working with customers to implement innovative design processes and leverage high-performance computing in their engineering environments. He lives in Houston, Texas with his wife, two kids and two dogs.

Rick Watkins is the Altair Business Development Manager for the energy industry. He received his Bachelor of Science in Aerospace Engineering from MIT, and Master of Science in Aerospace Engineering from University of Texas at Austin. His professional interests include Enterprise Solutions with data analytics, numerical optimization and high-performance computing. He has spent the last 8 years working with customers to implement innovative design processes and leverage high-performance computing in their engineering environments. He lives in Houston, Texas with his wife, two kids and two dogs.
View all posts by Rick Watkins »

Learning Video: AcuSolve
The Challenge of Crashworthiness for Composites Cars