The use of radio frequency identification (RFID) solutions is becoming ever more widespread. From simply tagging retail items to comprehensive supply chain management, tags are being used to automate the tracking of items. One of the major challenges in designing and deploying RFID systems is to ensure proper communication between tag antennas and reader antennas, taking into consideration the potentially complex operating environment. In this regard electromagnetic modelling of the complete system can play an important role.

RFID Systems and the Benefits of EM Simulation

What is RFID?
RFID tags typically take the shape of stickers on products or containers. When illuminated by a reader antenna, tags passively re-radiate the energy in a modulated fashion, to convey information stored on the tag chip back to the reader. The largest part of a tag is its antenna. By nature the tag antenna must be thin and planar, offering manufacturing ease and low cost. Simple etched or printed structures are most often preferred. The reader antenna is usually a patch antenna, which is circularly polarised to minimise polarisation mismatch.

Issues of Concern
Tag antennas are generally designed with omni-directional radiation in mind, considering isolated operation in a highly homogeneous environment (e.g. free space or above an infinite dielectric slab). Antennas are matched to chip input impedance. However, in reality tags are placed on many different items consisting of dielectric and metallic materials. These structures significantly influence tag antenna performance, degrading desirable radiation pattern properties and matching. Beyond the tag antenna’s immediate surroundings, losses due to multi-path effects, obstructions, real ground and other factors relating to the complex physical environment can also reduce tag/reader EM coupling.

Reduced tag/reader EM coupling decreases the efficiency of RFID systems. Read range is reduced due to less power being delivered to the tag chip (typically chips have an activation power threshold). Read rate is also influenced, as the level of tag/reader coupling influences the signal to noise ratio. Therefore, it is important that these environmental influences are taken into account to ensure robust RFID system designs.

Benefits of Simulation vs. Measurement
Given the complexities discussed above and the challenges posed by new applications, designers often resort to repetitive measurements and trial and error to optimise RFID system performance parameters. From an EM point of view every environment or scenario can be different. Simulation offers a very cost effective alternative, allowing designers to quickly experiment with different tag antenna designs, reader configurations and deployment scenarios. E.g. tag and reader antenna radiation patterns can be optimised, EM field maxima and minima can be identified for proper placement of interrogators and tag placement can be investigated.

Characterising the Tag
Common tag antennas include meander line antennas, microstrip patch or inverted-F antennas, as well as a large class of printed short dipole-like antennas of which the shapes vary greatly. The KSW Excalibur tag falls into the latter category, and is widely used. Figure 1 shows the omni-directional donut-shaped radiation pattern of this tag at 915 MHz, the centre of the ISM UHF band (902 – 928 MHz). The method of moments (MoM) simulation technique is used, as it is ideally suited to the analysis of open-region, radiation and scattering scenarios.

Tag placement analysis
It is less obvious how this antenna will perform when conformally attached to a plastic bottle filled with liquid. Figure 2 shows the resulting radiation pattern, with liquid εr = 2.2. The bottle acts as a lens, focussing the radiated power. Where the tag previously had an omni-directional gain of 2 dBi, it has now become directional, peaking at 3 dBi.

Figure 3 shows the induced surface currents and the radiation pattern, when the tag is mounted on a pallet of 144 metal canisters. Intuitively, one might expect the metal canisters to act as a ground plane, causing more directed radiation away from the pallet. In fact the opposite happens, since the spacing between canisters allows EM waves to be guided through the pallet and the greatest far field gain occurs on the opposite side of the pallet, peaking at just below 7 dBi. 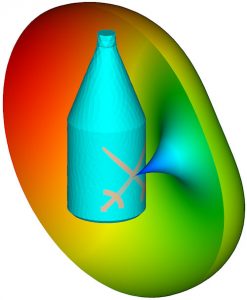 These results illustrate the impact that tag placement can have on RFID system performance. Judged on performance in isolation, a tag antenna might be suitable for a particular application, but in practice the situation may well be different. 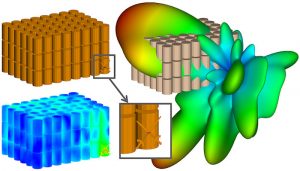 Figure 3: Surface current distribution and radiation pattern of an Excalibur tag antenna on a pallet of metal canisters.

Reader Antenna in Its Operating Environment
Beyond tag placement and its effects on tag operation, the operating environment within which the reader antenna communicates with the tag plays an equally important role. The reader antenna orientation can typically be freely chosen for optimal polarisation performance, while its location is generally limited by practical considerations. Simulation can also be used to determining the viability or optimality of the reader antenna location in a given environment (e.g. a production or storage setting).

Consider a typical reader antenna consisting of a circularly polarised patch antenna on a finite back plate. The antenna is mounted at a height of 1.7 m on a forklift, used to transport items in a warehouse with regularly spaced steel support beams. Figure 4 shows the simulated near field magnitude just above the ground plane. Quiet zones occur in shadow regions behind pillars and interference causes localised quiet zones at some distance directly in front of the reader antenna, without any line-of-sight obstruction being present. A vertical near field cut directly in front of the antenna is shown in Figure 5, where path gain effects causing positive and negative interference can be observed. The identification of quiet zones is important to avoid regions where the tag activation power threshold cannot be achieved.

Specific scenarios such as containers/pallets in certain locations, different forklift locations or the effect of walls may readily be explored. The tag antenna could also be included, to calculate S-parameters for the system over the whole frequency band of interest. Actual power delivered to the tag can be calculated by modelling the tag chip as a lumped load with impedance corresponding to its input impedance.

The results shown in Figures 4 and 5 were calculated with the multi-level fast multipole method (MLFMM), which is an alternative implementation of the MoM to dramatically reduce computational cost when dealing with electrically large problems. 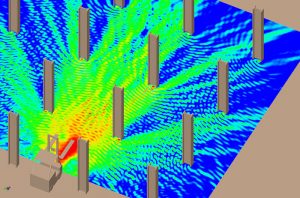 Figure 4: Near field above the ground plane in a warehouse environment, generated by a tag reader antenna mounted on a forklift (20 dB visualisation range).

Figure 5: Vertical near field cut in front of a tag reader antenna operating in a warehouse environment (30 dB visualisation range).

Beyond the numerical methods used here, asymptotic, ray-based method such as the uniform theory of diffraction or geometrical optics (shooting and bouncing rays) could be used for electrically extremely large RFID problems such as long distance indoor propagation. On the other hand, for electrically small but dielectrically complex problems, such as tag-reader interaction in the presence of the human body, the finite element method (FEM) can be employed. The FEM can either be used by itself or in hybrid coupling with the MoM (e.g. the reader antenna is modelled with the MoM, while the human body is being modelled with the FEM in order to combine the strong points of the two methods).