A four-port microstrip coupler is modelled in FEKO to calculate its transmission, coupling and isolation

Schwab and Menzel described the design of microwave components using planar multilayer structures in [1].  One of the structures described in this work is the four-port microstrip coupler that is shown here.

Geometry of four-port coupler described in [1]

A FEKO model was created for this structure, with the following specifications:

A standard RT/Duroid 5880 substrate with the following characteristics were used in the model:

This design features four square slots that are cut into the ground plane between the top and bottom transmission lines.  For a method of moments (MoM) solution, FEKO’s implementation of the planar Greens function features the ability to model the slots in the ground plane as magnetic triangles.  This means that only the slots are meshed and not the ground plane itself, saving significantly on simulation resources.  For comparison, the model was also constructed with the slots subtracted from a finite ground plane and solved with FEKO’s finite difference time domain (FDTD) solver. 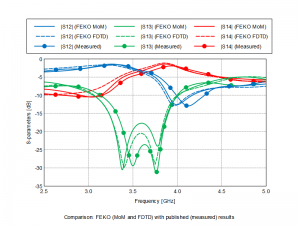 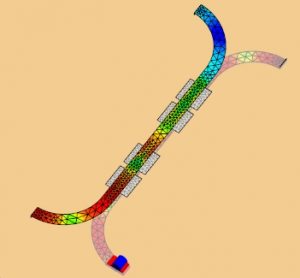 Surface current distribution of the coupler at 3.5 GHz