Until the advent of digital computers and the development of suitable numerical methods, one could manually generate the equations of motion for a system, but except for the simplest of cases no solutions could ever be found because the equations were too complex. All of this started to change in the 1970s, when researchers started to use the power of digital computers to not only formulate the equations of motion for an arbitrary mechanical system, but also compute its response using new computational techniques. Thus the field of modern Multibody Simulation (MBS) was born.

Jean le Rond d’Alembert (1717-1785) introduced the notion of inertia force. With this, he was able to articulate the principal of virtual work. The equations of motion for any mechanical system could be deduced from a simple Variational principle, “The net virtual work done by the internal and external forces in any system, due a reversible virtual displacement that satisfies the system constraints, is zero”.

The term “Multibody” is used for the complex systems encountered in a variety of industries as shown below. 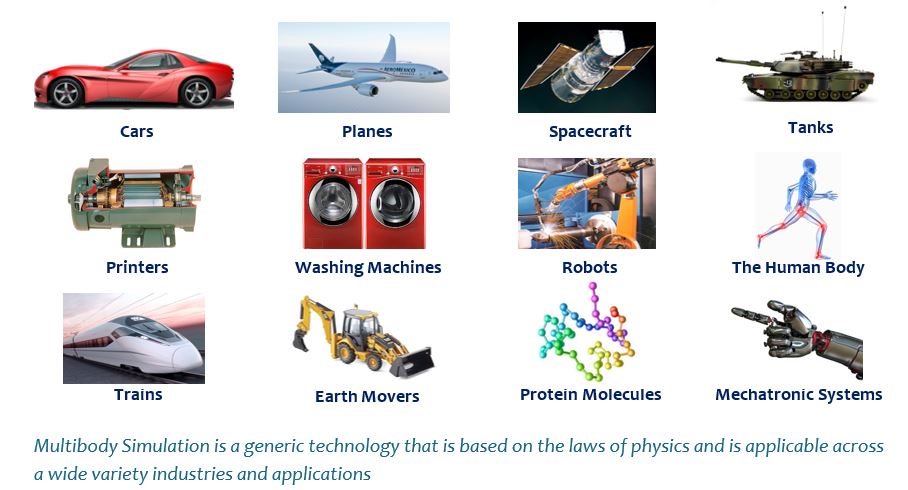 A defining characteristic of all these systems is that they can undergo large overall motion that is comparable to their dimensions. These systems are typically represented as a set of connected particles, rigid bodies and flexible bodies that are subjected to a variety of environmental forces and inputs. The goal, of course, is to build such systems in a digital computer, predict and improve their behavior.

MotionSolve is Altair’s Multibody solution. It is available in many different environments. Analysts can use it as an integrated solution in HyperWorks. Designers access its power through the supremely easy-to-use solidThinking Inspire offering. Finally, engineers interested in control simulations can connect MotionSolve “blocks” to signal-based or Modelica blocks in a solidThinking Activate diagram to create their system model. MotionSolve uses the Principle of Virtual Work to formulate its equations and relies on sophisticated numerical methods to provide you with fast and accurate solutions.

Designers and analysts are often making changes to a system by changing the underlying CAD description. The question often arises, how does the new design work? Or does it even work?

With MotionSolve, you can quickly create a functional model of your CAD assembly and simulate it to see how the system moves. In the figure below we see how a design for an excavator functions. 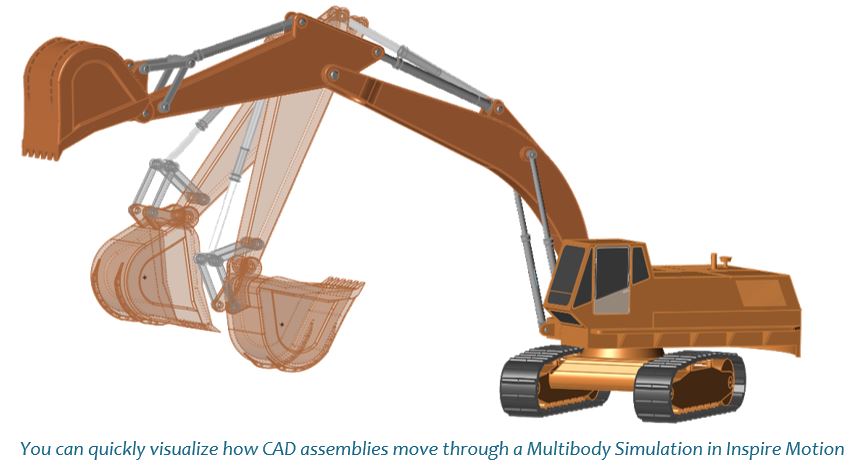 You can go beyond animating a system and understand why it behaves the way it does. Referring to the figure below, you can examine the motion of the laptop cover with respect to its base; you can compute the robot dimensions required to achieve a specified path; when the motion is specified, as in the case of the seat mechanism, you can back-calculate the forces required to create this motion. This type of analysis is called kinematics – it deals with the study of motion and the forces required to achieve it.

Often, you are interested in the forces and how they affect the motion of a system during its normal operation. It is well known that the forces in a landing gear are at their most severe when an aircraft lands. You can compute the forces in the various members for typical landing scenarios and design components so that they can withstand these loads. Similarly, for the gear set shown below you can compute the contact points between the teeth, estimate the contact and friction forces at the contact points and get an understanding of how the contact forces are distributed on the teeth. 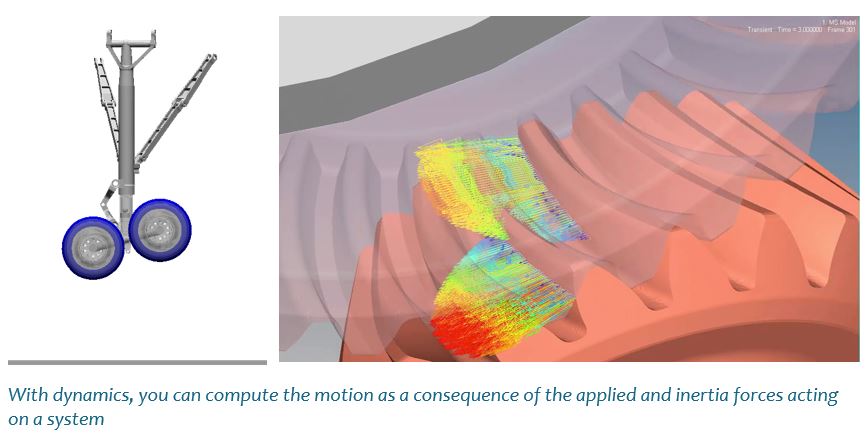 The output from a Multibody Simulation can be used as input for a subsequent finite element analysis.  From a system level simulation, you can compute the time history of all of the forces acting on a component – such as the gears shown above, or the suspension component that is shown below.

Force time histories, computed by a system level Multibody Simulation can be provided as load cases for component size, shape and topology optimization. By using realistic loads you can be assured that from a strength perspective, the gear or the lower control arm will not fail during normal operation and you will still be able to minimize weight. You can do this as a 1-click operation in Inspire Motion. You can also provide these as load cases for fatigue life calculation and ensure that your suspension component will not fail due to fatigue during normal operation.

Altair’s new 1D CAE simulation tool, solidThinking Activate, makes it easy to assemble, simulate and validate multi-disciplinary systems. In an Activate diagram, you can connect sensing, actuation and control models to a multibody model to create the system model. MotionSolve (shown as a dark-pink robot block below) is available as a block in Activate. 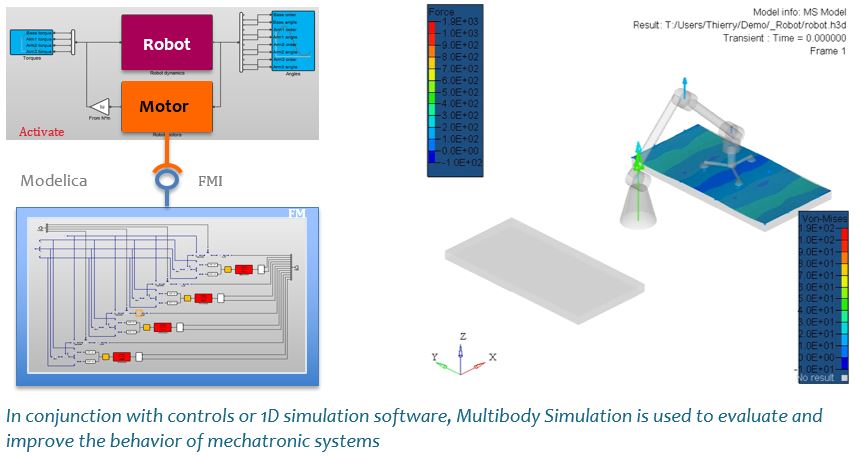 Co-simulation lets you analyze the system model. The Multibody model is simulated in MotionSolve while the control and 1D subsystems are simulated in Activate. Signals are exchanged at regular intervals between the simulators so that the results from one simulation influence the results in the other. There is no restriction on the size or complexity of the Multibody model that can be imported into Activate.

Real world systems are multi-disciplinary in nature. Take the bus below as an example. It contains hydraulic subsystems that represent the brakes; many control systems represent controllers in the bus. The bus is driven by a driver – also modeled a hierarchical control system. The frame and chassis of the bus can contain many flexible components – typically represented as finite element models. Then you have a need to accurately model tire-terrain interaction. This definition can be very complex when the road is not smooth. 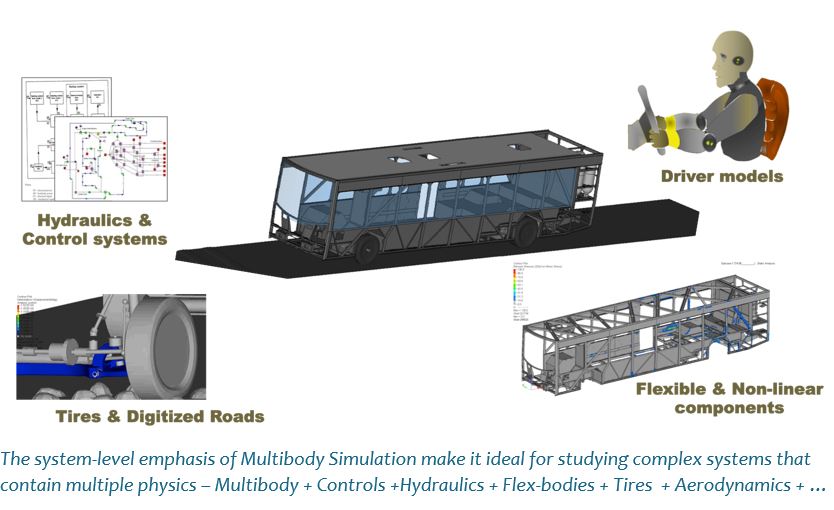 Multibody Simulation, by virtue of its system level focus provides an ideal environment for assembling, analyzing and improving such complex systems.

It is possible to linearize a Multibody model at an operating point and compute the vibration frequencies and vibration modes of the system.

Through such analyses you can recognize whether the system is stable or not and understand how vibration is being transmitted. Then you can take effective measures to minimize the effects of such vibrations.  For the brake system on the left, you may be interested in minimizing brake vibration or noise due to judder, moan and squeal. For the washing machine on the right you could be interested in minimizing vibrations caused by the uneven loading of clothes. This imbalance causes the washing machine to vibrate when the drum spins at a fast speed to extract the water from the clothes.

Finally, Multibody Simulation is used to certify system designs prior to large scale manufacture. Systems like cars, trucks, helicopters and planes are tested on a variety of operating conditions to prove that they are ready for general usage before large-scale manufacturing begins. In the past expensive physical testing was used. Increasingly, high-fidelity simulations with validated models have taken over this role.

MotionSolve is a comprehensive Multibody solution. It is an integral part of HyperWorks and solidThinking. The guiding vision for MotionSolve is to replace time consuming and expensive hardware evaluation processes with much more agile and inexpensive computer analysis and design. Engineers and designers worldwide are using MotionSolve to accelerate product innovation, reduce product development time and cost, improve quality, and reduce design and manufacturing risks.