This white paper illustrate the benefits of CMA for antenna design and integration.

The theory of Characteristic Mode Analysis (CMA) is a well-known method originally proposed by Garbacz [1] and later refined by Harrington and Mautz [2] that allows for the analysis of arbitrary structures by solving a generalized eigenvalue equation derived from the Method of Moments (MoM) impedance matrix. The resulting eigenvalues and eigenvectors give insight into the resonating behavior of structures such as antennas. This helps designers to follow a systematic, intelligent approach rather than a brute force method, by looking at the eigenvalue spectrum and the eigenvector distribution [3].

In [4] CMA is used to design a mobile antenna operating in the LTE 1.8 GHz band. A predefined surface area is assumed on which the antenna will be etched, in this case a curved metal sheet on the outer edge of the PCB. CMA is then used to calculate the modal currents on the surface for the dominant modes at 1.8 GHz. 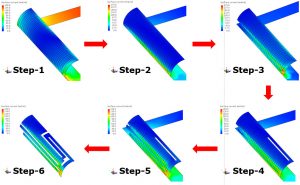 The antenna is designed by modifying the metal sheet systematically based on the modal current distribution.

In order to create a resonant current path, slots are cut into the curved metal sheet where the amplitude of the modal current is low, leaving metal strips where the modal currents are high. After each modification the modal significance (MS) is re-analysed to ensure that the resonance (MS = 1) is still at 1.8 GHz, and if necessary the sizes of the slots are tweaked to tune the resonance. In this manner a current path is determined which is inherently resonant.

The final design modal current, modal significance and corresponding S-parameters when the antenna is excited with an edge port.

The advantage of this approach is that it is more intuitive than standard optimisation algorithms and therefore the optimum design requirements can be met in significantly less iterations. 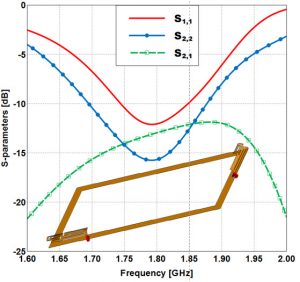 The design is then applied to a dual MIMO configuration.

While [4] concentrated on antenna design aspects, in [5] CMA was used to facilitate the integration of a dual channel MIMO antenna into a mobile device for LTE operation. A PCB size of 60 x 120 mm was chosen, which represents an average PCB size for modern smart phones.

The PCB modal current distribution at resonance can be useful for various aspects during integration, including optimum placement of the antenna on the PCB, optimum cable routing for passive measurements, modification to PCB geometry and designing passive resonators. The focus of this study was primarily integration aspects, so components like the display frame and battery where investigated.

The display frame geometry is tweaked using CMA to design a passive resonator.

The modal currents exhibit higher strength at the sides of the PCB. This lends itself to the idea of a passive resonator loop design. In [5], the display frame width, length and spacing from the PCB is optimised with CMA to resonate at the same frequency as the antenna, 2.6 GHz. The simulated MIMO performance shows improvement for several significant parameters including the S-parameters (reduced Snn and Smn), radiation efficiency and mean equivalent gain (MEG) with an acceptably low envelope correlation coefficient. 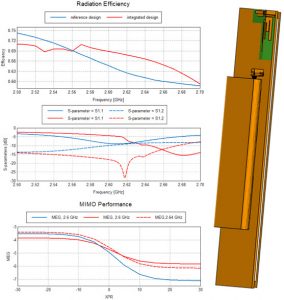 Combined performance of the antenna, display frame and battery.

CMA was also used to find the optimum placement of the battery connector with respect to the antenna and the spacing of the battery from the PCB. The combined performance including display frame and battery are shown above, compared to the original antenna and PCB only. An improvement of 5% in radiation, 5 dB in coupling and up to 1 dB in MEG where achieved.

The major advantages that CMA offered in this study were two fold: namely the CMA simulations are fast (in the order of a few minutes) and bring valuable insight through the modal currents, which helped improved an antenna design during the integration process.

CMA provides a novel approach to antenna design and integration challenges. In this white paper, two different examples were presented which illustrate the value of CMA. Using the modal current distribution information to design and integrate antennas can reduce the number of prototyping iterations compared to brute force optimisation approaches as the antenna designer can follow a systematic approach.