It seems like yesterday when in fact, it was more than 10 years ago when I was working on product development projects related to the first chips and devices based on ZigBee for home automation applications. At that time, ZigBee was known as a low-cost, low-power, and wireless sensors network technology for wireless control and monitoring applications. When working on those early projects for clients, the term “Internet of Things (IoT)” was not yet used.

The idea of IoT was developed in parallel, most likely started by Kevin Ashton in 1999 during a presentation at Procter & Gamble (P&G) where he linked the idea of Radio Frequency Identification (RFID) in P&G’s supply chain to the then-red-hot topic of Internet. Going back to ZigBee, its evolution has been significant and nowadays we have case studies like the Arial Hotel in Las Vegas. In the Arial Hotel, 4,300 guest rooms contain 70,000 ZigBee-enabled devices that seamlessly and wirelessly give guests full control of in-room systems like the temperature, door lock, curtains, and more. The ZigBee Alliance today is promoting Zigbee as a global wireless standard foundation for the IoT.

IoT concept has evolved over the years and refers to a network of uniquely identifiable objects or “things” with embedded electronics, software, sensors, and connectivity to enable objects to exchange data. These connections can be Machine-to-Machine (M2M) or Device-to-Person or vice versa. With this framework, IoT can be seen as an umbrella covering many technologies (wireless and wired) with billions of connected devices which are related to a broad set of applications and services. Some of these applications use the word “smart,” like Smart Cities, Smart Agriculture, or Smart Meeting, and due to the potential huge amount of generated valuable data, IoT is also related to Big Data.

The 3 Waves and IoT Value

An interesting press release from Gartner says that 6.4 billion connected “things” will be in used this year, up 30% from 2015, and this figure is expected to grow to 20.9 billion by the year 2020.

Let’s talk now about waves! Take a look at the “IoT Waves” as predicted by Ericsson, where 3 waves are predicted for the development of connected devices. The first wave is Networked Consumer Electronics, the second is Networked Industries, and the third is Networked Society/Everything which is where we start talking about the “Internet of Everything”.

Then what about IoT business value? I have seen some companies using IoT in their marketing campaigns to gain traction since IoT has become a powerful buzzword. On the other hand, I have seen other companies with a specific strategy to use IoT as a new revenue stream. What is clear is that IoT is a broad and fragmented market. If someone wants to develop or assess the value of an IoT product or solution, it is necessary to look at how such product is adding value and fitting into the IoT value chain. From the chip and module elements to the business solutions, vendors positioned on the upper part of the chain are offering solutions for vertical markets.

The same report from Gartner mentioned above estimates that the IoT will support total services spending of $235 billion this year, up 22% from 2015. Services are dominated by the professional category (in which businesses contract with external providers in order to design, install, and operate IoT systems). However, connectivity services (through communications service providers) and consumer services will grow at a faster pace.

What about the electromagnetic (EM) waves and fields carrying IoT data? While IoT does not assume one specific communication technology, wireless communication technologies are playing a major role. Small, cost-effective, and low-powered sensors or devices are bringing IoT to the smallest objects installed in any kind of environment. Such wireless devices can be battery-operated and include a wireless module and antenna to send the sensed data (e.g. temperature) to the network or Cloud. Engineers designing and developing IoT devices are using EM simulation tools like FEKO at the early stages of the design process to launch more innovative products while ensuring the specifications are met in terms of parameters, like radio coverage, battery life and Electromagnetic Compatibility (EMC).

EMC is related to the proper operation of a device when other electronic devices are present. In other words, the device should be immune to a certain level of external interferences without generating interferences that can disturb other devices and equipment. Another key aspect is to ensure that devices will work properly and communicate effectively in the real environment. There are a huge variety of environments, such as a wireless sensor on a fridge or a wearable device where one typically needs to simulate the device with an antenna, including a human body model to ensure that the device will communicate properly when mounted on the body. Another example is the communication with RFID-enabled items or “things” in a warehouse environment, Fig. 2.

Simulated surface currents on Printed Circuit Board (PCB) with antenna for ZigBee used to analyze potential EMC issues (left) and simulated near field radiation of RFID antenna mounted on a forklift in a warehouse environment to analyze blind zones where communication issues may arise (right).

Electromechanical sensors, actuators, and controls are an important part within IoT. EM simulation tools like Flux are used for the design of electromechanical elements thanks to their magnetic, electric, and thermal solvers and the possibility to model motion and eddy currents, among others.  A 3D contactor is an example of control where EM simulation is used to model and analyze the currents and magnetic flux density in the mobile part, Fig. 3.

Up until now, we have been talking about EM simulation around the design and analysis of IoT devices alone or when installed on the real usage scenario. But there is much more.  A wireless sensor network consists of spatially distributed autonomous sensors that cooperatively monitor physical or environmental conditions such as temperature, sound, vibration, pressure, motion or pollutants, and for specific applications including factory or home automation, object tracking, fire detection or traffic monitoring, to name a few. Tools like WinProp focused on wave propagation and radio network planning offer the possibility to model wireless sensor networks with different types of nodes. Essentially you can simulate and analyze the connectivity and path losses between the nodes of the network in different environments (rural, urban an indoor), for different wireless air interfaces while considering other aspects like interferences and probability of failures for the nodes. Fig 4 shows different wave propagation results from the analysis of a gateway node (blue ball) within an industrial environment. This analysis and results are used to determine the possible locations for the client nodes of the mesh sensor network.

Figure 4: Prediction of received power for the gateway node, blue ball in the picture (left) and threshold analysis of the received power results (right)

At a higher level of the IoT physical layer, engineers are interested in the performance at the system level. This is where tools like solidThinking Embed are adding value to the IoT chain since they allow quick modeling and simulation of the end-to-end IoT communication systems as well as estimating their performance under a variety of channel conditions. This leads to reduced hardware prototyping, decreased design cycle time, and overall better system designs. One example is the simulation of a US 915 MHz band ZigBee communication link where one can simulate the Bit Error Rate (BER), a key parameter that is used in assessing systems that transmit digital data from one location to another. BER is used to quantify a channel carrying data by counting the rate of errors in a data string. 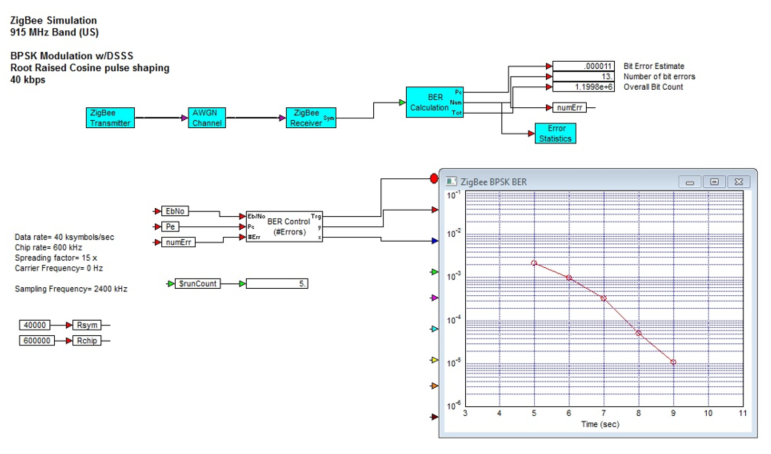 Figure 5: Diagram for the simulation of a US 915 MHz band ZigBee communication link. By repeating the simulation at different signal to noise levels, the diagram produces a BER curve for the link

The Convergence of Machines, Data and Analytics on IoT

Going up in the IoT value chain I was introducing before, there is great value in the ability to perform analytics on the acquired and massive data so to extract useful insights. Analyzing data efficiently allows people to make decisions that can have a big impact on efficiency, productivity, costs, and many other factors. Thus, data visualization and dashboarding is an important aspect of any IoT platform, where tools like Envision can be leveraged not only to get a high level overview of the information and activity of the connected devices, but also to drill down into historical activity details (like temperature and humidity of sensors). Also, advanced analytics techniques like Machine Learning can be employed to predict device failures and to prescribe preventive actions based on sensor data patterns. 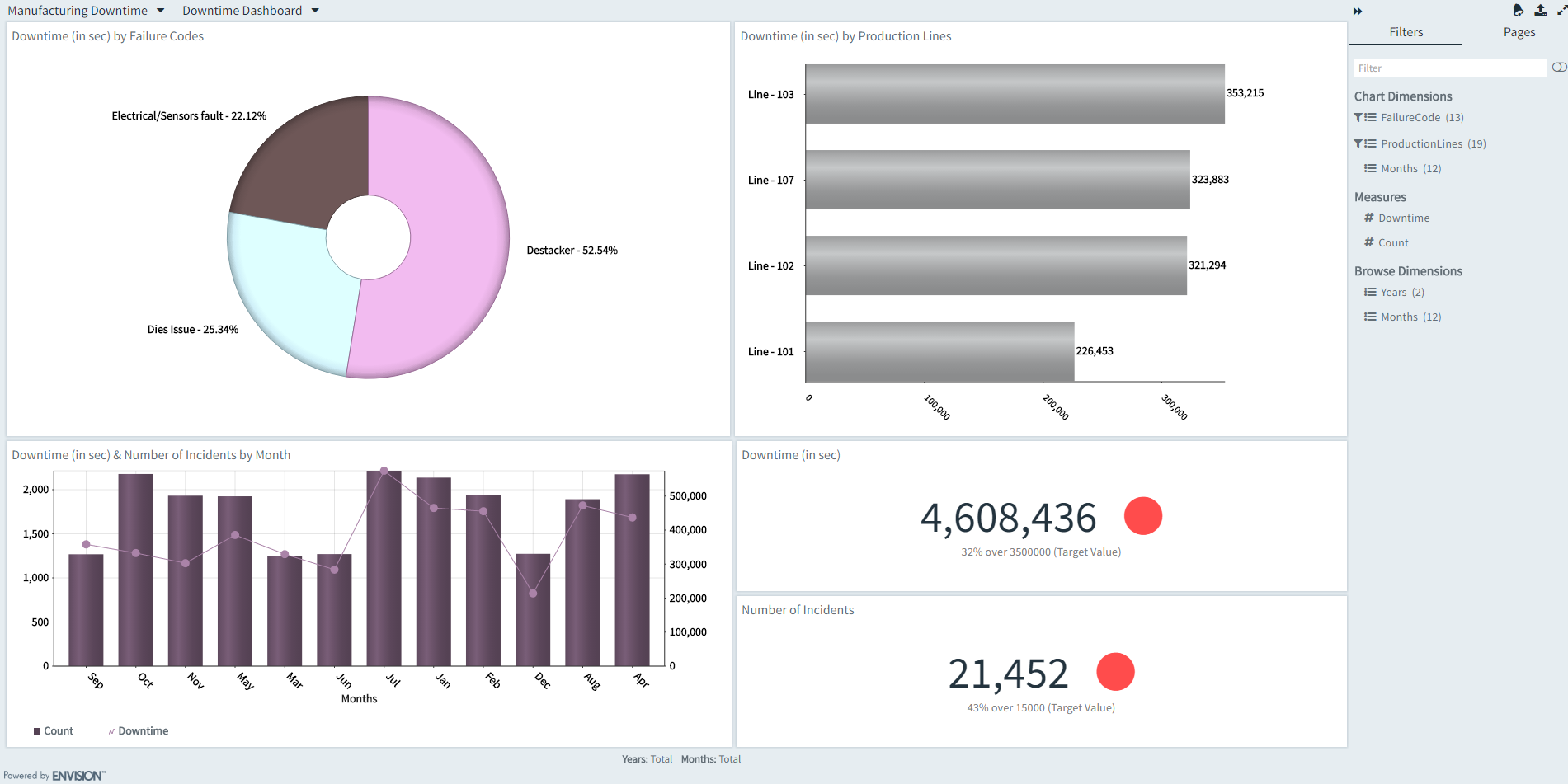 I see IoT as a fragmented and multifaceted market that has been, and will continue, to grow and evolve. It is an umbrella for many wireless technologies, covering a broad set of applications as well as a solution targeted to specific vertical markets. IoT is not new for Altair. More customers are developing innovative IoT products and solutions using our leading electromagnetic simulation tools and system level modeling solutions, like FEKO, WinProp, Flux and solidThinking Embed. They are also starting to look to our recently launched cloud-based business intelligence software, Envision, to better visualize and analyze their data and learn from it. IoT is a gateway to understand how we can communicate with technology and how technology can provide us with more in depth information about everything. Even more “things” will certainly be connected in the future as we move forward with technology.

Jordi Soler
Vice President of Global Business Development at Altair
Dr. Jordi Soler is Vice President of Global Business Development for Altair's electromagnetic solutions, including FEKO electromagnetic simulation software, one of Jordi's passions since 2000. Jordi has 17+ years' industrial experience and a strong background in electromagnetics and in computational electromagnetics related to multiple areas, including antennas, EMC, RCS and electronics. He has occupied several business development and engineering management positions and led multiple product development projects for many industries, including automotive, aerospace, military, electronics, wireless and telecommunications. He has won several international awards and is co-inventor of +20 patents involved in licensing deals worth more than $70 million.

Dr. Jordi Soler is Vice President of Global Business Development for Altair's electromagnetic solutions, including FEKO electromagnetic simulation software, one of Jordi's passions since 2000. Jordi has 17+ years' industrial experience and a strong background in electromagnetics and in computational electromagnetics related to multiple areas, including antennas, EMC, RCS and electronics. He has occupied several business development and engineering management positions and led multiple product development projects for many industries, including automotive, aerospace, military, electronics, wireless and telecommunications. He has won several international awards and is co-inventor of +20 patents involved in licensing deals worth more than $70 million.
View all posts by Jordi Soler »