A symmetric inverted F antenna is modeled in FEKO showing how size reduction is achieved through inductive loading.

With recent advances in communication technology physical design constraints of antennas, such as weight and size have become more important and a trade-off between lowest operating frequency and minimum antenna size is often required. In [1] capacitive and inductive loading of symmetric, planar inverted F antennas (IFAs) are investigated as a method to reducing antenna size. Here the IFA of [1] is modeled in FEKO to determine the effect of inductive loading.

The input impedance of the antenna is shown in Figure 2 for different inductive loads. As reported in [1] the resonant frequency is decreased and input resistance at resonance is reduced as the inductance is increased. 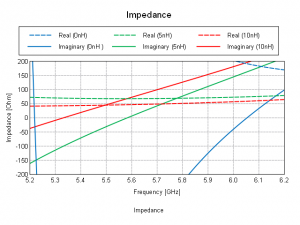 With a reduction in input resistance the impedance match to a 50Ω system is improved as shown in Figure 3. Notice also that the bandwidth is reduced as the resonant frequency decreases. 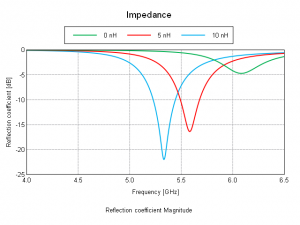