Multi-Objective Optimization in the Design Cycle

Design optimization seeks a design that minimizes the objective function while satisfying design constraints. Real-world design problems are usually characterized by the presence of many conflicting objectives. Therefore, it is natural to look at the engineering design problems as multi-objective optimization problems. For example, we may want to maximize range and payload mass while trying to minimize manufacturing costs for an airplane design. 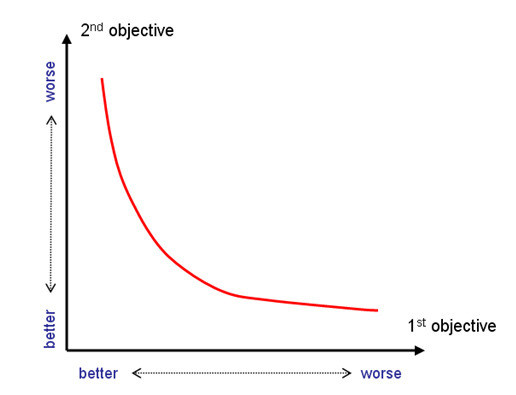 So, in practice, the designer often needs to consider several design criteria or objective functions simultaneously. In most cases, trade-offs exist among the objectives, where improvement in one objective cannot be achieved without deteriorating another. As a consequence, it is rare for a multi-objective optimization problem to produce a single optimal solution; instead, a set of equally valid solutions will be proposed.

In this article, we will demonstrate the design process of a control arm with multiple objectives using Altair HyperWorks.

A multi-objective optimization (MOO) problem is formulated as follows:

where x is the design variables, f1(x), …, fn(x) are multiple objective functions and gj(x) are the constraints.

When dealing with multiple objectives (f1, f2, …) the natural “better than”/“worse than” relationships between alternative solutions no longer hold, and the relationship among individuals is described as a “domination” relationship, leading to Pareto-Optimal set instead of a single optimal design.  Let’s introduce these two key definitions.

From these definitions, in MOO, the approach is to search the design space for a set of Pareto optimal solutions, from which the designer can choose the final design. Pareto optimality is defined as a set where every element is a possible solution for which no other solutions can be better in all design objectives. A solution in the Pareto optimal set cannot be declared as “better” than others in the set without using other information (such as preference) to rank the competing objectives. For the two-dimensional case, the Pareto front is a curve that clearly illustrates the tradeoff between the two objectives (see figure 2). 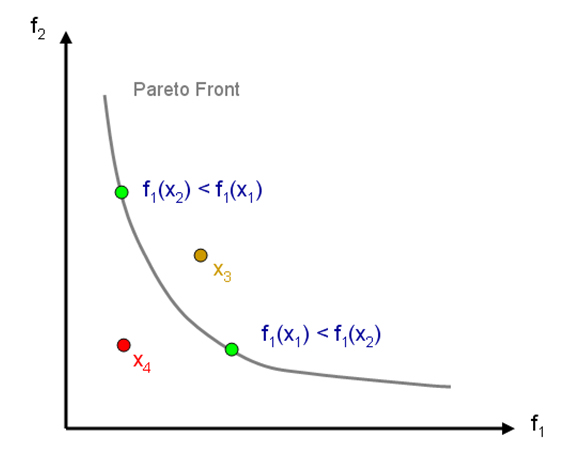 Weighted Sum is an approach for treating a MOO problem as a single objective optimization problem by summing up the weighted individual objectives. HyperStudy provides a user-friendly GUI to perform this task:

Since the problem is no longer a MOO problem, any standard optimizer of HyperStudy (GA, ARSM, MFD, SQP) can be used to solve it.

Multi-objective genetic algorithm, unlike the weighted sum approach, produces a set of Pareto-optimal solutions (non-dominated solutions).  The MOGA implementation in HyperStudy is based on the standard feature of GA and includes:

Multi-Objective Optimization of an Arm

This example illustrates the tradeoff challenges faced by the designer of a typical mechanical component. The arm shown below is clamped at one end and is under an axial loading on the other end (see figure 4).

The model has been meshed and modeled in HyperMesh. Linear static analysis is performed using RADIOSS, the HyperWorks finite element solver,. 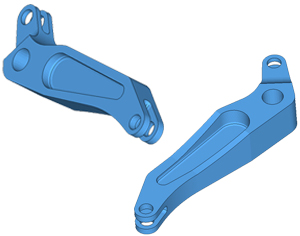 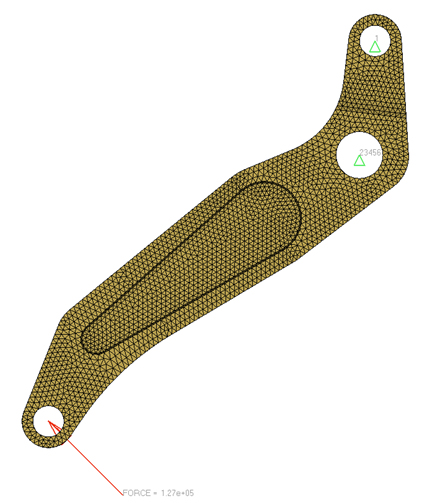 The problem is stated as follows: minimize the mass and minimize the maximum displacement, but respect an upper limit on the stress level throughout all the part. 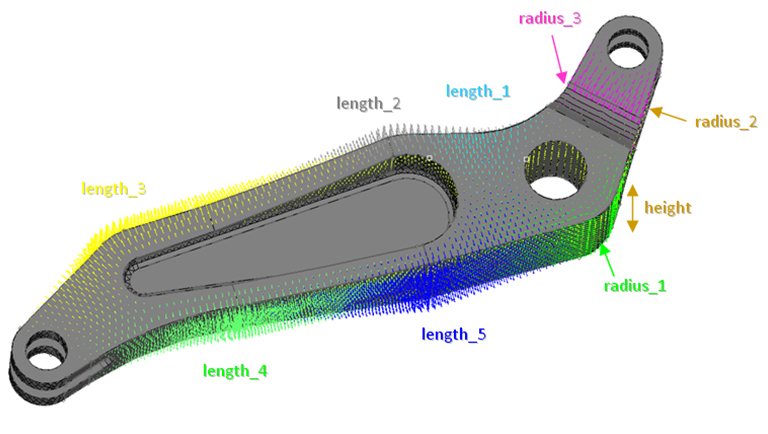 Figure 5. Shapes defined on the model.

The first step is to create the shape variables using HyperMesh. HyperMesh includes HyperMorph, a tool for doing parametric mesh-based shape changes (morphing). In the morphing process, domains are created around the FE model features. Handles are defined on the edges of these domains. By moving a handle, nodes in the associated domain also will move. Each of these movements then can be saved as a shape variable and can be exported directly to HyperStudy, the HyperWorks solver-neutral design exploration, study and optimization tool.

In HyperStudy, the study is set up by identifying these variables (nine shape variables), setting up the simulations to run (RADIOSS), and extracting the responses (maximum displacement, volume, maximum stress).

Figure 6. Table of all the design variables. 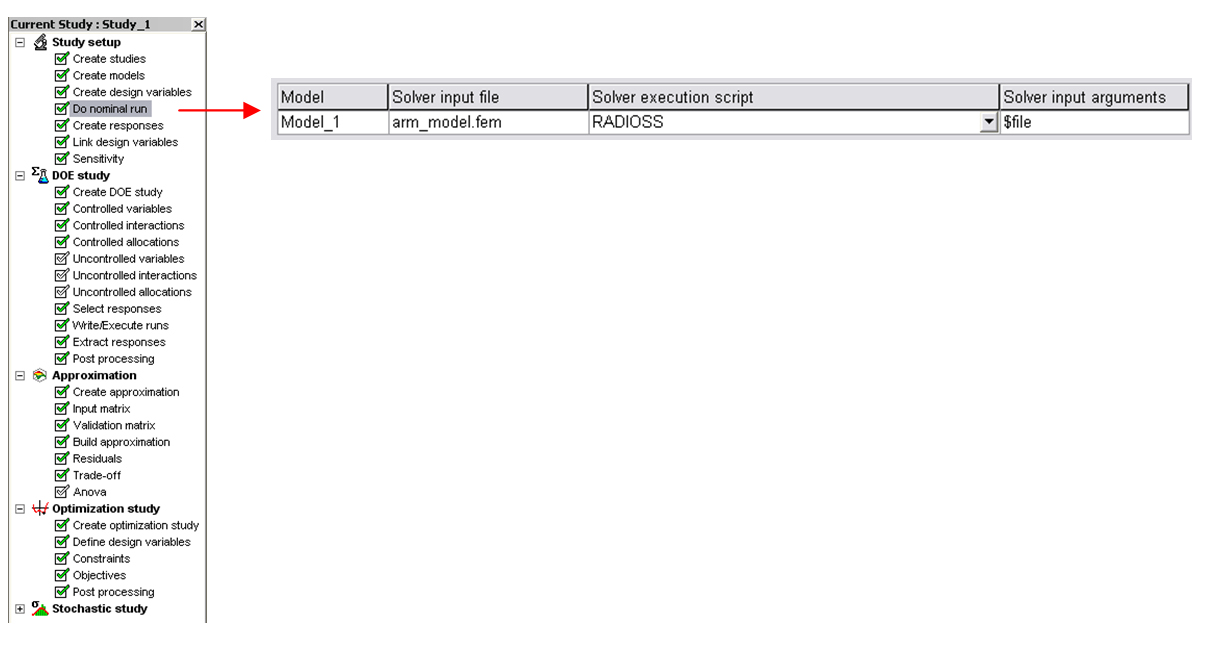 The study starts with an attempt to reduce the number of variables. A ffactional Factorial (16 runs) DOE (design of experiment), using the nine variables is realized. The main effects plots (figure 8 ) show that three design variables (the three radii are of smaller impact on the responses than the other six variables and thus can be screened out.

Only six design variables are then kept to perform:

Moving Least Square Method (MLSM) approximations are built and checked for all responses using 64+86 runs as the input matrix and 20 runs as the validation matrix.

A multi-objective optimization is performed using MOGA. The target is to minimize both the volume and the maximum displacement, while satisfying a constraint on the maximum stress in the part.

After running 25 iterations of MOGA, with a total of 1,878 analyses on the meta-model, the results of the last iteration as shown below are obtained (figure 10).  Note that, contrary to standard optimization, an MOO will produce, for a given iteration, a set of designs (a Pareto front). The front displayed below is the 25th iteration and is made of 116 non-dominated points. 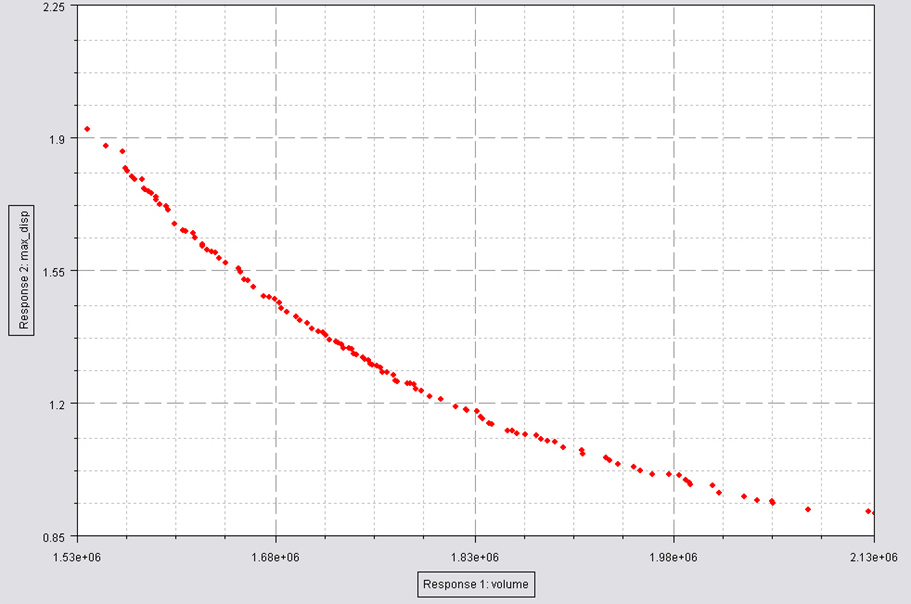 Figure 10. Pareto front obtained at iteration 25 of a MOGA optimization.

In this plot, X-axis is the volume and Y-axis is the maximum displacement:  The tradeoff is based on selecting the best compromise between the two competing objectives.

The black lines on the graph below show where the nominal point (initial design) is situated. 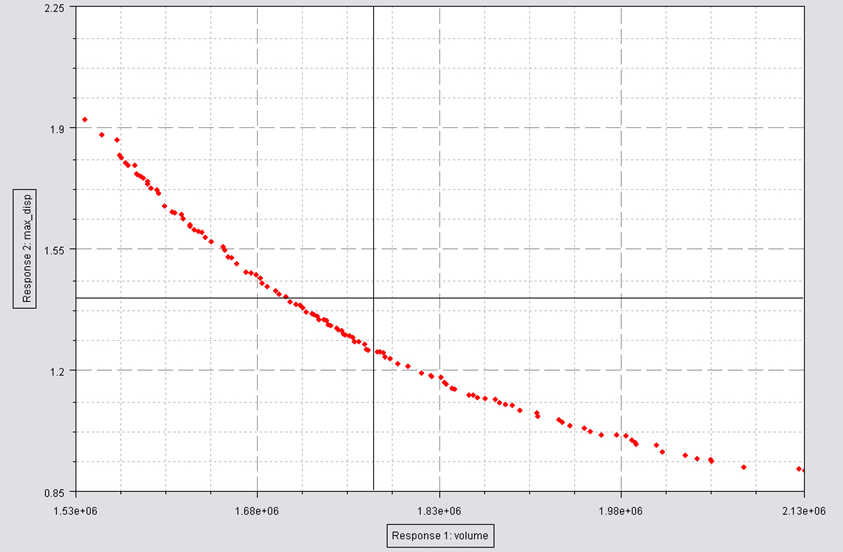 Notice also that MOGA produces a front where all points are admissible (maximum stress < 300 MPa).

For example in the graph below, we can see that, of the 116 non-dominated points of iteration, 25 are all giving a max_stress response under 297.97 MPa (x-axis) 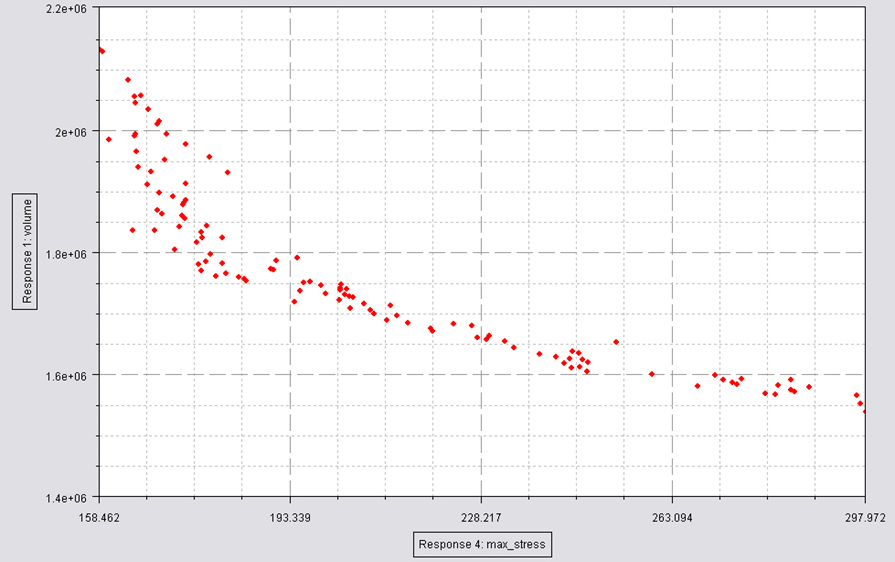 Handling multiple objectives is a constant dilemma for designers. Often, the “most important” objective is kept and other objectives are transformed into constraints. But this does not reflect the tradeoff among all possible designs. Implementation of MOO methods in HyperStudy allows for extended exploration of solution and do tradeoffs.

This study illustrates the use of HyperWorks to search for an optimal arm design such that the volume (mass) is minimized and the maximum displacement is minimized, while meeting stress constraints. In this study, HyperStudy automatically updates the design using HyperMorph for shape variables, runs RADIOSS as the FE solver and uses a specific algorithm for multi-objective optimization. With this process, a set of solutions is proposed to the designer to select the best compromise.