As you can see in Figure 1, it’s a very broad offering covering structural analysis, highly nonlinear analyses like crash and safety, thermal and CFD technology, systems and MBD simulations and last but not least, manufacturing simulation. Such a comprehensive offering is required in order to capture all the physics that our designs are subject to, not just as individual solutions but also as integrated and coupled solutions providing an environment for multiphysics analysis. Note that this integration can be at multiple levels depending on the physics needed to be captured.

At Altair, ‘optimization-driven design’ has been a key philosophy since the beginning, so when we develop our solver functionality, it’s built on a foundation of optimization, providing tools not only to analyze but to actually optimize products performance.

So, how does that translate into our software? If you are a HyperWorks users, you might be familiar with solvers names such as AcuSolve, used for thermal and CFD, MotionSolve, our multi-body dynamics solver, and RADIOSS, our solver for highly nonlinear, explicit simulations. OptiStruct, our solver for statics, NVH (noise, vibrations and harshness), thermal and nonlinear implicit solutions, is also our optimization brand, providing an integrated optimization environment for the solutions we support. We are also working on enabling OptiStruct to optimize solutions from our other solvers as well, providing an integrated environment across all our solvers. Since openness has been one of HyperWorks’ key characteristics since its inception, we don’t stop there. Our customers use 3rd party tools or tools that are part of the Altair Partner Alliance to solve certain problems and we strive to provide an optimization environment for such scenarios as well. That’s where HyperStudy comes in, with its capabilities to run DOE (design of experiments) studies, build approximations or meta- models, perform stochastic and optimization studies across different tools and disciplines, enabling this open architecture optimization environment. 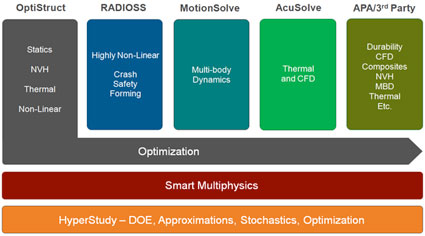 Nonlinear response optimization has been implemented in different ways and we can broadly classify them as analytical sensitivity-based, criteria-based or through approaches such as the equivalent static load method, or approaches such as response surface approximations, genetic algorithms, et al. 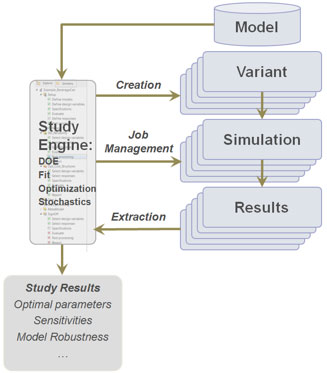 In the following sections, we will discuss two applications of how nonlinear response optimization has been successfully applied on real-world use cases.

For powertrain durability groups, one of the commonly performed analyses is an engine block bulkhead and bearing cap study. This involves studying the strength and stiffness of the bulkhead under the crankshaft rotating loads. Attributes of the modeling include bolt pretension loads for the bolts that connect the bearing cap to the bulkhead, an interference fit between the bearings and the bearing cap and bulkhead, contact with friction and the crankshaft rotating loads itself. The FE model is typically a section of the engine block from one half-cylinder to the adjacent half-cylinder as shown in image 4 below. 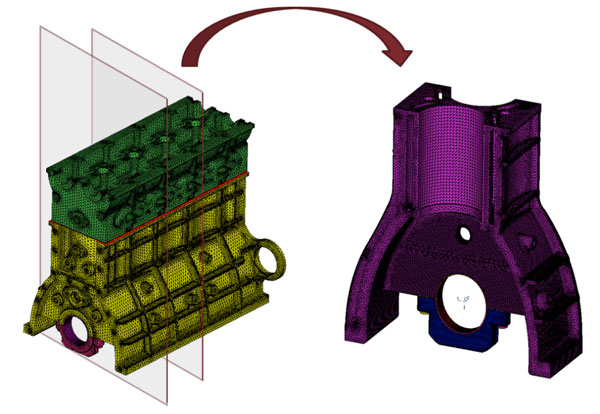 In our study, after having successfully setup and run the analysis, the model was then defined to carry out a topology optimization. The goal of the study was to identify the optimal material placement in the bulkhead region and simultaneously design the vent-hole shape under the prescribed nonlinear analysis conditions. The optimization problem was formulated as: 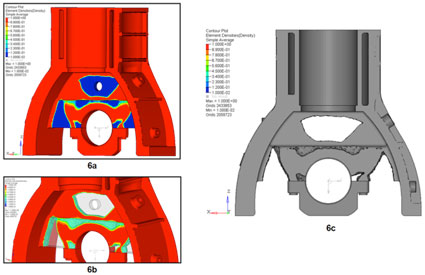 This application describes the different steps involved in the design of a laundry detergent bottle. The goal of the study was to design a bottle with a higher collapse load and stiffness, while reducing mass of the bottle as well. The main driver for this study was transportation: in order to transport larger quantities of the bottle, more rows would need to be stacked on top of each other. To prevent the bottom-most row of bottles from collapsing under the stacking load, the collapse strength of the bottle would need to be increased.

But what could be changed in order to achieve this higher collapse load, while at the same time, lowering the bottle mass? The following image represents the multiple shape variables and thickness variables that could be modified so as to meet design targets. 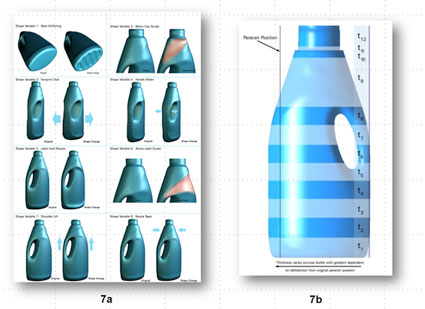 7a: Shape Variables
7b: Thickness Variables along Length of the Bottle

In total, there were twenty design variables – eight shape variables and twelve thickness variables. But not all these variables would necessarily contribute towards positively influencing the design performance. Therefore, a design of experiments (DOE) was run to screen out the design variables that did not have a significant effect in the behavior of the key performance metrics, i.e. the collapse load and bottle mass (in this case, we ran a nonlinear buckling analysis to identify the collapse load of the bottle). With the reduced design variable set, the problem size becomed more manageable, but there was still the aspect of large solution times, given the complex nonlinear solution that needed to be run.

During an optimization, the run time can be significantly high given the multiple iterations that are required. The issue of computational cost – long run times and large number of runs – was addressed by using a response surface approximation method to carry out the optimization. By running an additional DOE, an approximation surface (also known as response surface or meta model) is built with the reduced design variable set thereby enabling a much more efficient and quicker optimization process. The overall solution run times can typically be reduced by orders of magnitude by using a response surface based approach.

Using the approach described above, the optimization was successfully run and the optimized design resulted in an increased buckling capacity by 20% while the mass was lowered by 5%.

The following image depicts the analysis setup as well as a comparison of the buckling load curves, before and after optimization. The blue curve clearly indicates a much higher buckling load carrying capacity of the optimized design as compared to the original, baseline design. 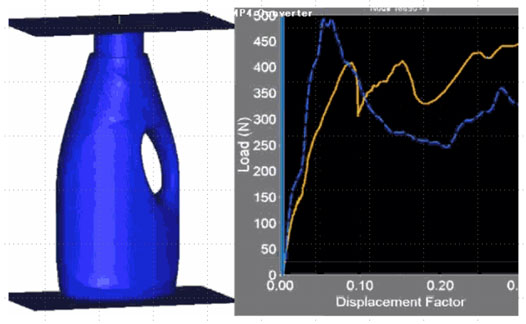 In summary, we can see that OptiStruct and HyperStudy have been successfully applied to nonlinear response optimization problems, from right at the concept level to the detailed design level. The simulation and optimization environment provided through HyperWorks reflects the Altair philosophy of “optimization driven design”, which is critical to meeting the stringent design goals and schedules put upon us today and for the future.

Warren Dias
Business Development Manager - OptiStruct at Altair
Warren is the Business Development Manager for OptiStruct where his responsibilities include increasing the global footprint and usage of OptiStruct. He joined Altair in 2000, and now has nearly 15 years of experience in the field of finite element analysis and structural optimization. He holds a Bachelor Degree in Mechanical Engineering from Manipal Institute of Technology in India.

Warren is the Business Development Manager for OptiStruct where his responsibilities include increasing the global footprint and usage of OptiStruct. He joined Altair in 2000, and now has nearly 15 years of experience in the field of finite element analysis and structural optimization. He holds a Bachelor Degree in Mechanical Engineering from Manipal Institute of Technology in India.
View all posts by Warren Dias »