In the majority of cases, CAE commercial solutions were developed by engineers and academia, creating software for a concentrated area of physics such as structural engineering, computational fluid dynamics, multibody dynamics, electromagnetism and several others.  For years these solutions and their associated pre- and post- processors continued to mature while generally putting development focus on the area of study they were originally designed for.  In recent years, however, an increased number of interfaces between solutions have been established in order to provide a more holistic coverage for simulation involving multiple areas of physics. 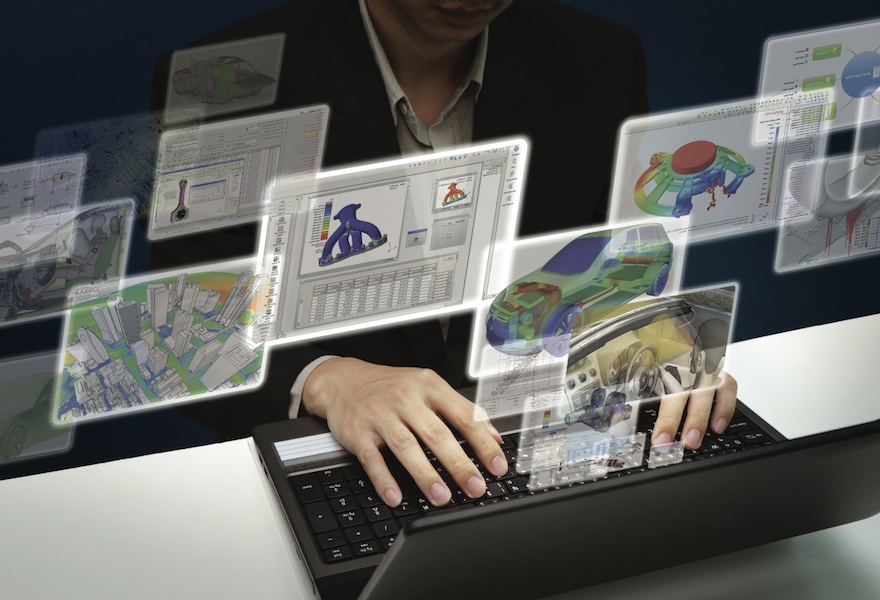 Through HyperWorks’ open platform, Altair provides the environment to integrate partners codes into the analysis process

Solutions developed for a particular area of physics are generally setup to maximize the simulation potential offered by that discipline.  In such cases, modification of the code to broaden the range of physics can potentially add risk to the original solution capabilities and/or performance.  This dilution in functionality, sometimes referred to as trying to create the “Mother Of all Solvers” is desirable to avoid.  Instead, establishing robust interfaces between solvers has become more common so that each solution can retain its specialty while together they provide a wider coverage of the needed physics.  To achieve this interfacing, vendors have created Application Programming Interfaces (API’s) as well as open input and result formats to enable communication between applications.  Subsequently these solutions have been applied to many of examples throughout the industry.  Let’s look at a few of them.

In the structural composites field, there are a number of specialized codes that are used to predict material behavior and model failure modes.  Since composites are always composed of at least two distinct materials, the failure modes and damage progression are usually quite different than for more traditional materials such as metals and plastics.  Through Altair’s open platform of HyperWorks, we provide the environment to integrate these codes into the analysis process and create a more intuitive interface to the user to more easily access these specialized applications.  We have done this with two of our Altair Partner Alliance (APA) applications, Genoa from AlphaStar and MultiMech.  Both codes model the micromechanics of the composite and provide more accurate failure prediction than more traditional methods found in most FEA software.  In both cases, in cooperation with our partners, we have developed initial integrations with these codes and the analysis capabilities of RADIOSS and OptiStruct.  These integrations will lead the way to utilization with the optimization capabilities of OptiStruct so these failure modes can be included as constraints in the structural optimization process. 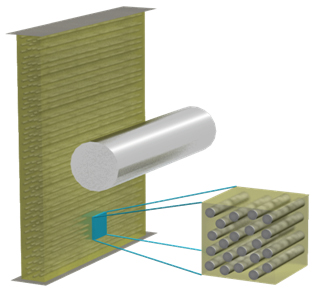 Diagram of a composite structure including matrix & fibers

In another case where the integration between MotionSolve and FTire was applied, Altair ProductDesign used MotionSolve/FTire during the design and engineering of the LCO-140H hybrid bus to develop analytical road load data to support the FEA fatigue analysis of the unique, aluminum frame design.  This analytical approach was used to compress the engineering process through generating simulated dynamic loads early in the design process.  Normally, data from physical testing is not available until after a physical prototype has been built and instrumented. Road surfaces were created using road profiles that match US bus industry standard proving grounds.  Data for the FTire model was developed using physical measurements of the tires to be used on the prototype bus.  The MotionView model itself incorporated flexbodies for the fully dressed bus structure, as well as flexbodies for major front and rear suspension components.  The results of the analysis helped identify areas in the structure design that might have experienced fatigue issues, and were subsequently redesigned.  The detailed tire model also provided reasonable longitudinal inputs into the suspension and body structure that are not accounted for with using a simple 4-post test that only utilizes vertical inputs.  The application of these high fidelity loads gave Altair more confidence in the overall structural design of the initial prototype. 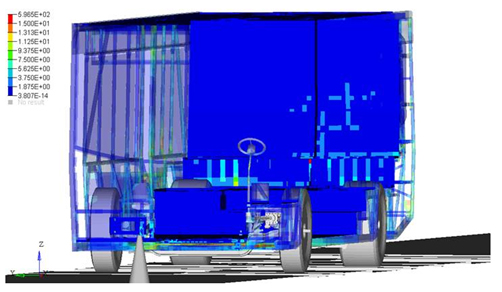 An image of the Altair Bus model traversing an analytical road

A final example involves the integration between Altair’s AcuSolve CFD software and the electromechanical analysis software, JMAG, developed by JSOL (Japan).  This EM software is a market leader in prediction of low frequency electromagnetics. Electromagnetic properties are very sensitive to temperature. For example, in the design of an electric motor, engineers will use JMAG to calculate electro-magnetic heat loss from the motor. Fluid effects are incorporated via a heat transfer (film) coefficient applied to the surfaces of the motor in contact with ambient conditions. Coupling with AcuSolve allows for a much more accurate coefficient to be calculated. AcuSolve correctly models the fluid effects (e.g. air surrounding the motor) on the heat transfer from the motor to ambient. This is accomplished by projecting the 3-D JMAG heat loss data onto the 3-D AcuSolve Conjugate Heat Transfer model of the motor. AcuSolve solves for the heat conduction in the motor materials such as copper (coil), and steel (magnet and case), and the forced and natural convection heat transfer from the motor to the air. Additionally, AcuSolve can enable simulation of radiation heat transfer from surface to surface as well as solar radiation effects if the equipment is exposed to ambient sunlight.Influence of Temperature on Electromagnetic Properties 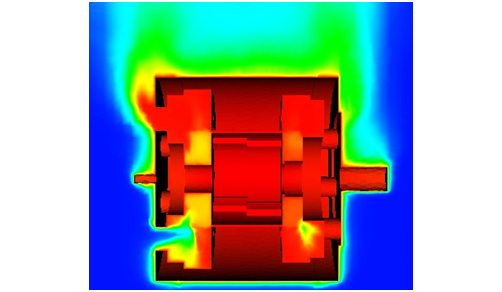 The previous examples are but a few that demonstrate interactivity of CAE solutions at the solver level to widen the potential area of application.  In some cases such as the interface to AlphaStar & MultiMech as well as JMAG, the interface between the solvers is based on a sequential solution.  For this sequential case, one solver is run which creates a set of results on disk.  These results are subsequently used as input for the second simulation.  For these cases, having an open input & results format is a must.  The other approach is co-simulation where solvers are running simultaneously.  The FTire case is an example of this.  Both MotionSolve and the FTire solution are running simultaneously and trading information as time moves forward.  Robust and well documented API’s are critical to enabling this kind of technology.

A final and important aspect involved in coupled solutions involves optimization.  This capability brings the application of coupled solvers to yet another level by providing the ability for automated design improvements.  Software such as HyperStudy can be applied as a wrapper to automate the simulation involving multiple solutions while controlling the design variables in the front of the process and responses on back.

Contributors to this paper include Chris Coker, Steve Cosgrove and Bob Yancey, all of Altair.

Systems Simulation Director at Altair
Jon is the director of Systems Simulation at Altair. Prior to this role, he was responsible for the program direction of HyperWorks® products that apply to modeling complex systems, including MotionView®, MotionSolve®, HyperStudy®, and ScriptView™. His over twenty-five years of experience in the computer-aided engineering software industry includes time spent at Ford developing custom applications in the vehicle dynamics domain. Jon rejoined Altair in 2000 as the program manager for MotionView, going on to become director of systems modeling. He holds a Bachelor of Science in Aerospace Engineering and a Master of Science in Mechanical Engineering, both from the University of Michigan.

Jon is the director of Systems Simulation at Altair. Prior to this role, he was responsible for the program direction of HyperWorks® products that apply to modeling complex systems, including MotionView®, MotionSolve®, HyperStudy®, and ScriptView™. His over twenty-five years of experience in the computer-aided engineering software industry includes time spent at Ford developing custom applications in the vehicle dynamics domain. Jon rejoined Altair in 2000 as the program manager for MotionView, going on to become director of systems modeling. He holds a Bachelor of Science in Aerospace Engineering and a Master of Science in Mechanical Engineering, both from the University of Michigan.
View all posts by Jon Quigley »