Summer is just ending in Phoenix, Arizona and it was a HOT one! They say it’s a dry heat, I say it’s a dry heat like an oven or a blowtorch. As an Arizonan native, I can honestly say it’s not so bad. The only time you have to deal with the heat is in the in-between places; in-between your cool, air-conditioned house and the cool, air-conditioned store for example. The “in-between” time is where many automobile engineers focus their attention when designing a new HVAC system for vehicles.

Whether it is waiting for your car to cool down during the dry summer in Arizona, or warm up during an “arctic freeze” winter in Michigan, consumers are expecting the time spent in between climate changes to be at a minimum. Additionally, the climate inside a vehicle plays an important role in the safety and health of the driver and passengers. A poor cabin environment can lead to distracted driving, putting both the occupants of the vehicle as well as others on the road in danger. Because of these requirements, design engineers are charged with finding ways to reduce the design cycle time and increase the efficiency of the system.

In the past, engineers relied heavily on wind tunnel tests during the design cycle to determine the effectiveness of an automobile heating, ventilation and air conditioning (HVAC) system. These tests are extremely expensive and time consuming. However, engineers are now adopting a smarter way to make more informed decisions by incorporating Computer Aided Engineering (CAE) solutions early in the design cycle. An example of this is shown in the image below. A transient Computational Fluid Dynamic (CFD) simulation using Altair’s CFD software, AcuSolve, was used to model the air flow through an automobile HVAC system. This simulation focused on a hot car (initial conditions set appropriately) and determined the time needed to reduce the temperature of the interior to a specified range. The reverse simulation can also be performed where the simulation predicts the time to warm up the interior of the vehicle when starting from a cold initial condition. 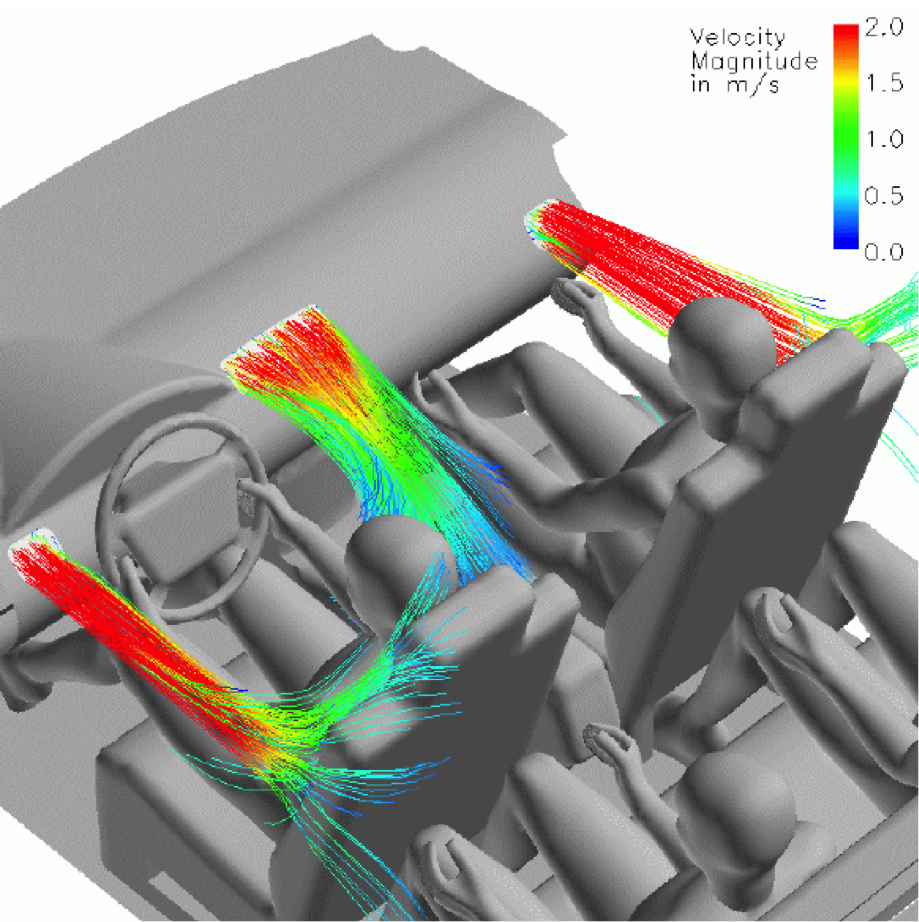 Figure 1: Streamlines from vents in cool down case.

The condition of the cabin environment extends beyond comfort, and is also necessary for the safety of the occupants, especially in cold weather. The defrosting capability of an HVAC system is an important aspect considered when engineers are designing the system. The simulation of the defrost performance is used to evaluate the time to melt and the melting pattern of a thin layer of ice on the windshield and the side windows at the front. Capturing an accurate melt pattern is important in designing a new system. This requires correct representation of the solid layers of glass and ice, accurate geometry, and precise inlet boundary conditions of the ventilation systems.

The example shown below was modeled using thermal shells to represent the ice and glass layers. These elements were modeled using appropriate material properties and thickness. The properties for the glass were assumed constant while the properties for the ice varied to account for the phase change from frozen to liquid water. Since the goal of the simulation was to determine when and where the ice clears from the glass, a calculation of where the melt begins (or break though) must be made. A standard estimation is to assume any ice over zero degrees Celsius to be ice-free. However, because the specific heat model for the ice specifies the phase change of the ice to occur at zero degrees Celsius +/- 1, a conservative estimate of ice melting at 1 degree Celsius was used. 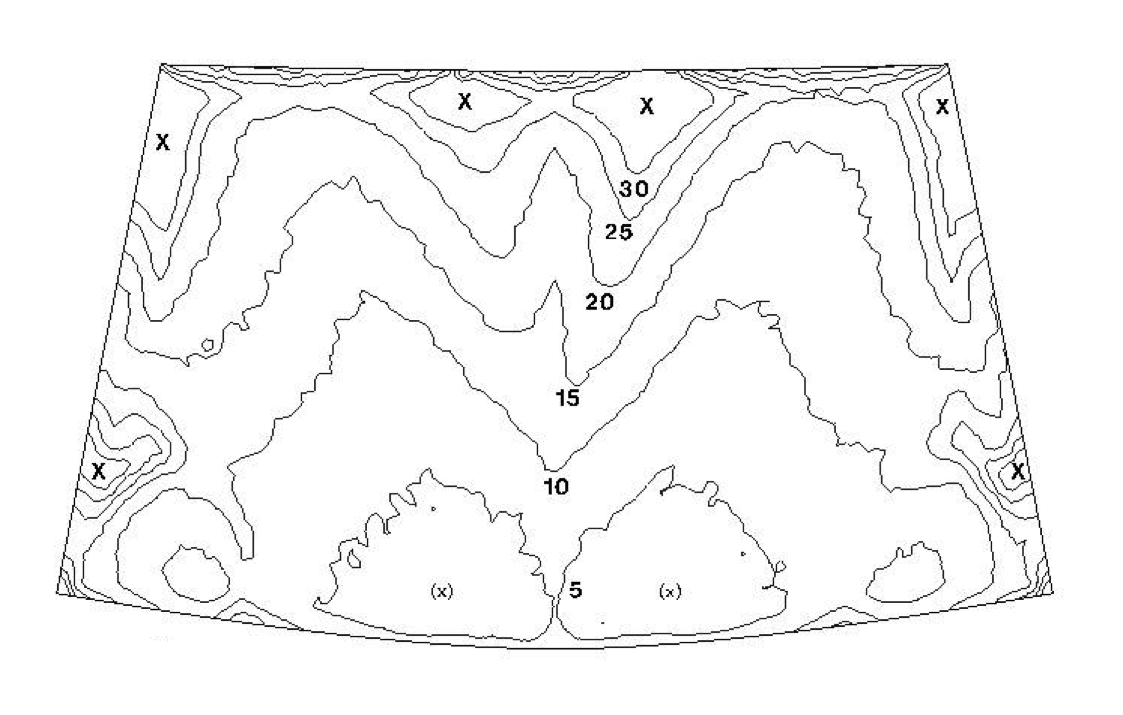 Figure 2: Melt pattern on the windshield at different time steps in the simulation.

The image above illustrates the result from this simulation where the breakthrough points are shown by an “X.” The melting location at different times in the simulation is shown by the lines on the window and the physical time. The breakthrough points are at the bottom center of the windshield which corresponds to the high flow from the center of the defrost duct opening, as expected. Defrost simulations such as these have been validated against experimental data to ensure engineers have a high confidence in the results. The images below are an example of a validation case performed by an engineer at Altair using AcuSolve for a defrost simulation prediction. The colored contours on the windshield depict the predicted ice break though and defrosting patterns as time progresses. The test data is illustrated by a solid black line. The simulation was able to accurately predict the defrosting pattern and time. 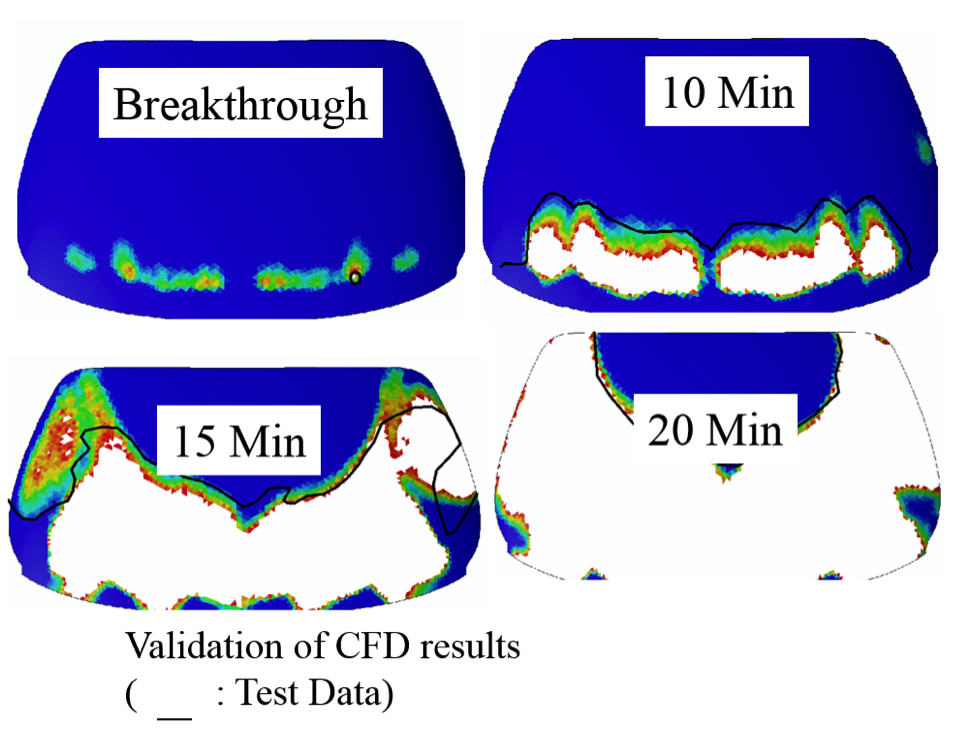 To further push the design envelope, engineers can also incorporate optimization into the design of an HVAC system. An example of an optimization of automotive HVAC ducting that was performed using tools available in the HyperWorks tool suite is shown below. The objective of the optimization was to design a system, which reduces the variation in pressure drop across all vents, thereby increasing the uniformity of the flow out of the vents. The geometry shown below was optimized using a morphing volume approach where geometric features were modified in a parametric method, determining the most efficient configuration. 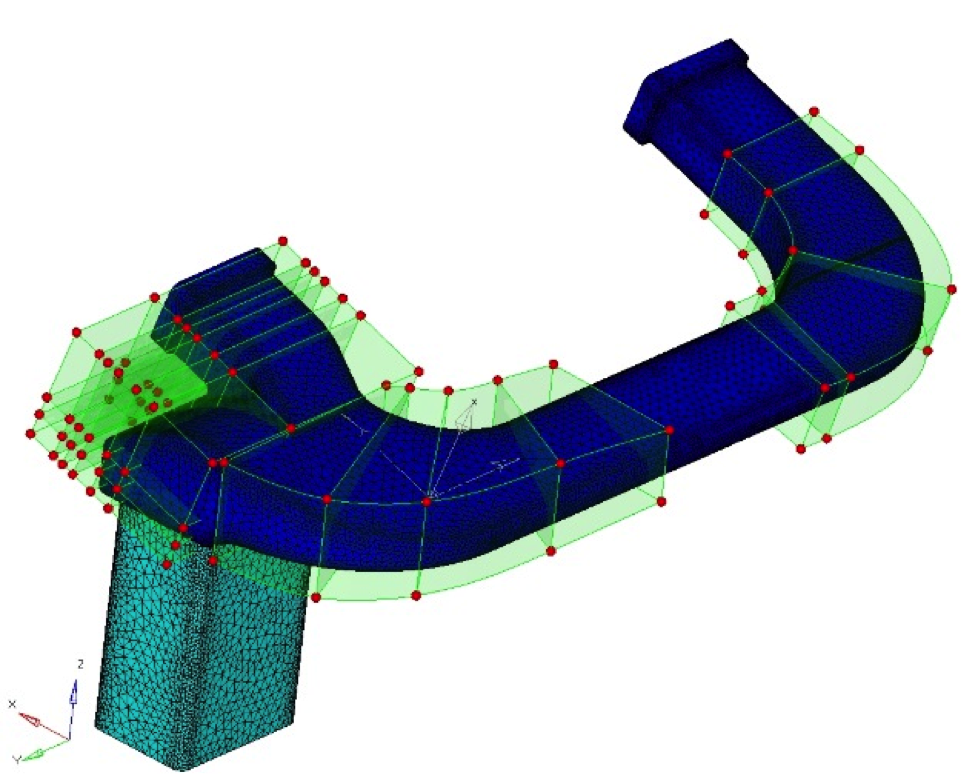 The shape variables in this optimization included two elbow radii, the center duct profile, the center duct elbow radius and combination shapes. The optimized geometry resulted in a pressure drop reduction of over 9 percent (shown in blue below) by simply optimizing the existing geometry. 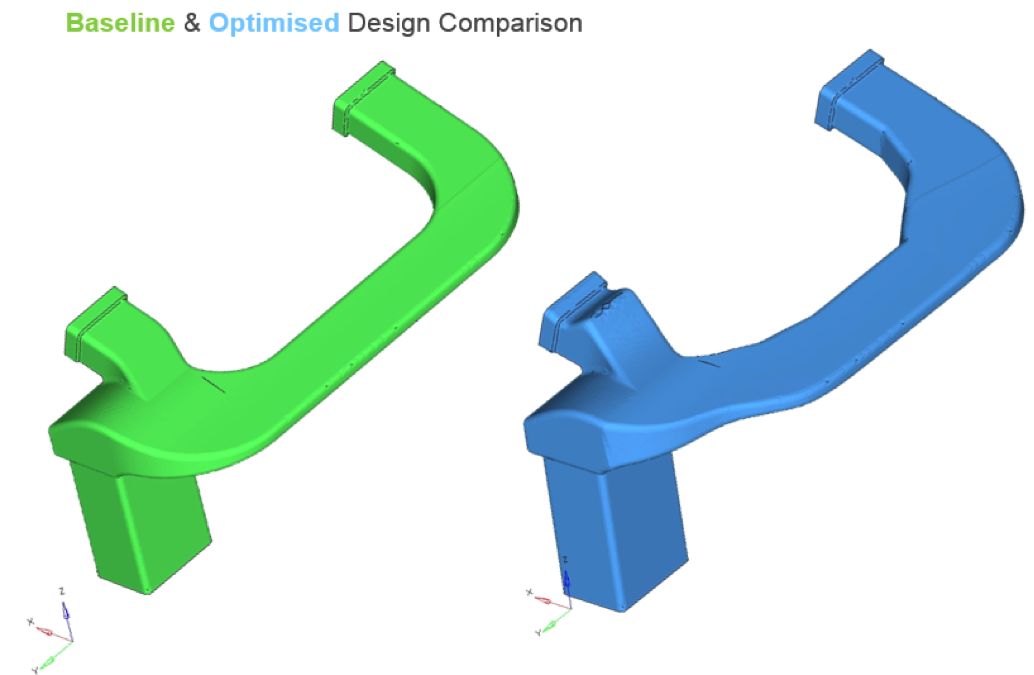 Engineers tasked with designing vehicle climate systems in a short amount of time can utilize these simulation techniques to improve their designs to efficiently match the customer demands. These high fidelity simulations of physics present in vehicle HVAC systems include time dependent heat transfer due to conduction, convection, solar radiation and flow distribution in and out of the cabin as well as also predicting defrost and demist performance. By using these simulations early in the design cycle, engineers can now design and optimize HVAC systems that meet the requirements and performance expectations while also guaranteeing a safe and comfortable driving experience.

Click below to watch the recording from the 2015 HyperWorks CFD for Automotive Webinar Series – Cabin Comfort: Analyze Airflows and Thermal Effects

This article was in collaboration with Bill Calver, Technical Manager.

Bill has over 20 years of experience in the field of computational fluid dynamics and heat transfer. His experience ranges from transient flow analyses involving mesh motion, transient thermo-fluid analyses of convection- and buoyancy-driven flows, environmental simulations involving defogging and demisting to physiological modeling and mold flow analyses. Industries include Oil & Gas where he has worked on such programs as Big Dog and Big Foot, Automotive, Wind Energy, Medical and others.  He also has extensive experience integrating CAD and CAE together in the design process.

Abigail Arrington
Application Engineer at Altair
Abigail joined Altair in 2012 as an Application Engineer focusing on proof of concept demonstrations and benchmarking with Altair’s Computation Fluid Dynamic (CFD) code, AcuSolve. She has over six years of industry experience working with AcuSolve, AcuConsole for preprocess and FieldView for post processors. Her current role includes working with prospective and current customers interested in AcuSolve and the Virtual Wind Tunnel, training and support, business development and mentoring. She holds a Master’s Degree in Mechanical Engineering from Northern Arizona University in Flagstaff, Arizona.

Abigail joined Altair in 2012 as an Application Engineer focusing on proof of concept demonstrations and benchmarking with Altair’s Computation Fluid Dynamic (CFD) code, AcuSolve. She has over six years of industry experience working with AcuSolve, AcuConsole for preprocess and FieldView for post processors. Her current role includes working with prospective and current customers interested in AcuSolve and the Virtual Wind Tunnel, training and support, business development and mentoring. She holds a Master’s Degree in Mechanical Engineering from Northern Arizona University in Flagstaff, Arizona.
View all posts by Abigail Arrington »