A patch antenna with capacitive feed probe is modeled in FEKO to determine its impedance and radiation characteristics.

Patch antennas have become quite popular due to their low profile design and ease of manufacturing.  Various methods exist by which to feed this type of antenna (e.g. pin feed, line feed, aperture coupling).  Another way is by placing a probe-fed capacitor patch next to the patch antenna, as in [1].  The advantage of using this feeding technique is that the inductive impedance of the probe is effectively canceled by the capacitive patch.  As a result a higher substrate (with longer probe) can be used to increase bandwidth.

Figure 1 shows a section through the FEKO model of the patch antenna with probe-fed capacitor patch in the xz-plane.  The Green function for multi-layered planar media is used to model the dielectric and air layers as well as the ground plane. 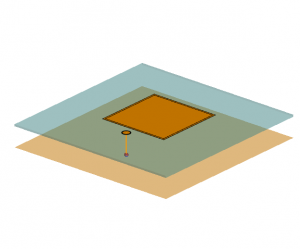 The impedance of the antenna is shown in Figure 2(a) and the reflection magnitude relative to a 50Ohm system in Figure 2(b).  As expected the reactive component is less inductive than usual for such a high-substrate patch and wideband operation is achieved (S11 < -10dB over a 25% bandwidth).
Figure 2: Impedance characteristics of patch antenna with capacitive feed probe 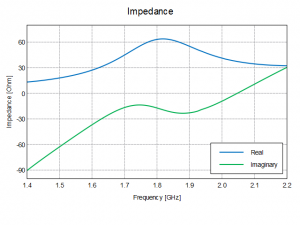 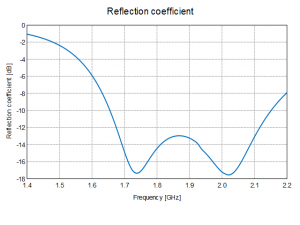 (b) Reflection relative to 50Ohm

Radiation patterns at 1.8GHz are also shown in Figure 3.  The angle phi is measured from the x-axis in the xy-plane (see Figure 1). 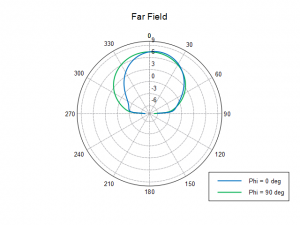 Flux & System Simulation Coupling
Getting the 3D Mesh of your CAD Model Ready for Electromagnetic Simulation, in an Efficient Way