Vincent Marché
Vincent Marché graduated first in electronics, and then went on to refine his skills at business school. After more than 10 years in the industry, working on product marketing and sales of sensors, switches and electronic devices, he fell into a melting pot called electrical engineering simulation. Supporting FluxTM electromagnetic simulation software since 2009, he is passionate about the large fields of applications addressed by simulation tools and the application expertise of the users. He is constantly looking for solutions that address the innovation needs of electrical engineers. Since the recent acquisition of Cedrat by Altair, he manages the promotion of electromagnetic applications, electrical engineering and e-Mobility.

Magnetic TMR angle sensor are deployed today in automotive electronics, as well as in many new industrial, consumer-product, medical, avionics, defence and 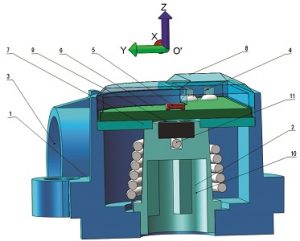 other applications. Under Flux 3D finite element simulation software for electromagnetics, several effects of the influence of magnet geometry parameters and mechanical tolerances of sensor positioning were investigated, such as airgaps and tilts effects. The results include optimum solutions useful for TMR, as well as for a wide range of other angle sensor types and applications.

What is a TMR sensor

Angle sensors applications are one of basic types of non-contact measurement by magnetic sensors, which are widely used today in the automotive field: throttl

e position sensor, pedal position
sensor, steering angle position sensor, PRNDL position sensor, etc., cabin rotary knobs and joysticks are the same classic angle sensor examples, now supplemented with different types of angle Hall sensor ASICs. The most common angular measurement configuration is onaxis end-of-shaft configuration (fig. 1-2), where the diametrically magnetized magnet is positioned on the end of the shaft, and the magnetic sensor opposite the magnet with an airgap between them (typically in a range 0-2 mm). When the shaft with the magnet rotates in the XY-plane, at least two sensor elements detect two absolute magnetic signals, sin (BX) and cos (BY). TMR sensors functionally based on magnetic resistance change respective to the magnetic vector rotation angle. 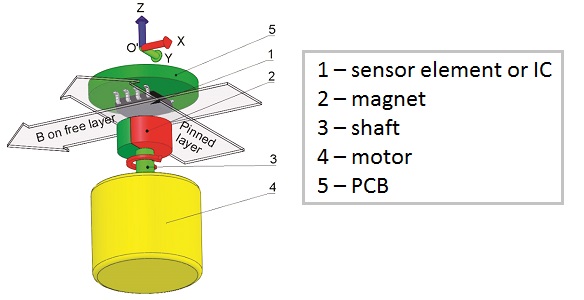 New promises of TMR and other very sensitive magnetoresistive sensors are concentrated in measurements of magnetic fields in ranges which are unreachable using Hall sensors (fig. 1-2). 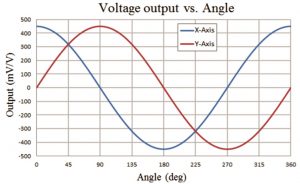 Sensitive sensors could provide higher Z-airgaps, higher resolution and higher accuracy, and operate with smaller magnets. This is required in many automotive and new non-automotive
applications, ranging from consumer to medical and defence. TMR sensors are more reliable and stable when operating in harsh environments than other commercial magnetic sensor types. However, because of their high sensitivity, this type of sensor can be more sensitive to parasitic influences of mechanical tolerances in assemblies with magnet and magnetic non-uniformity. At the
same time, we already know how such effects are cancelled, such as larger magnet diameter and height, which may be exploited only as a compromise with the miniaturization concept presented
above. Filling in this knowledge gap and developing practical recommendations for optimal TMR angle sensors applications are the key objectives of the study presented below. Firstly, some magnetostatic investigations must be implemented to apply the sensors in on-axis end-of-shaft configuration:

Below, we present a brief report about initial magnetostatic investigations made using Flux with summaries for each of them and comments on how to use it in practice. The absolute magnetic
signal able to sense the sensor was divided into three components along each axis. In Flux 3D, there are special tools for fast qualitative and quantitative analysis of magnetic field components, such as isovalue graphics, 3D curves and 2D curves.
In each Flux simulation, the analyzed parameter was changed, whereas the other parameters remained fixed. Magnetic signal component curves on the 2D grids were obtained, where the
sensor is positioning, and the curves were then analyzed visually. The optimum geometries of magnet systems having XY, Z or fully 3D magnetic sensitivities were identified. In optimized magnetic systems, the influence of tilt was also studied. Full details and tables are available in new digital Innovations Insight Magazine [2] (www. innovationsinsightmag.com).

In the study using Flux 3D, magnet diameter was changed, while the other parameters remained fixed. It was assumed that the sensor is positioning on the 2D sensor grid with a fixed airgap.
The main result of analysis conducted is that the best solutions for any XY-sensitive sensors may be found on the base of magnet with height 2.5 mm, but in a diameter range around 10 mm rather
than the previously-adopted 6 mm, e. g. disk shape (fig. 3). This solution allows increases in some mm tolerances in the XY plane, eccentricity, Z-airgap. Additionally, properly-shaped magnet could optimize operating magnetic induction values required for specific TMR sensors.
Magnetic system description in simulation presented above:
Height = 2,5 mm ; Remanence Br = 0,25 mT ; Airgap=1,8 mm.
As seen from fig. 3, BX is slightly less than 20 mT in the center of 2D Sensor grid that is suitable for all known angular TMR sensors such as MDT TMR3001 and TMR3002, NVE AAT001 and AAT003, TDK TAS2004, TAS4501, ATAS2001.
The universal results was obtained on the basis of a magnet with Br = 0,7 mT and may be useful for TMR, as well for other angular Hall and GMR sensors.

This study examined the preferred magnetic system in two situations:
1 – The tilt of Sensor Grid about X axis, along Y axis
2 – The tilt of Sensor Grid around Y axis, along X axis
Magnetic system description:
• Height = 2,5 mm • Br = 0,25 mT  • Diameter =10 mm • Airgap=1,8 mm
Results of any tilts are visible in Flux as offsets and non-symmetries of 3D B-curves. We saw that sensor elements are very tolerant to both tilts up to several degrees around both X and Y axes, especially if sensors are positioned near the centre of the magnet of disk shape with large diameter. However, the effects of X- and Y-tilts are not identical. The sensors are more tolerant to rotation around the Y axis (which is perpendicular to the magnet’s magnetization vector), up to 10°. The optimum solution in both tilt configurations is the differential sensor application with the disk shape rather than the cylindrical magnet. The key results of the study appear in fig. 4.

Fig. 4: 2D Bx isovalues for tilts about axis with a certain angle

This investigation was performed during post-processing of the same simulation results. There was varied only airgap parameter between the magnet face and 2D sensor grid. All geometry
parameters of the magnet remained fixed.
Magnetic system description:
• Height = 2,5 mm • Br = 0,25 mT  • Diameter =10 mm • Airgap=0.5…5 mm
The main results of the tests are illustrated in fig. 5. The optimum airgap range is from 0.5 mm to 3.5 mm. Large airgaps must exploited with greater care than was previously thought. Larger airgaps reduce absolute BX (BY) and BZ values together with allowed mechanical tolerances and eccentricity.
Smaller airgaps and larger diameters of disk-shaped magnets provide solutions that are more tolerant to sensor plane tilts.

During initial magnetostatic simulations of TMR angular sensors operating in tandem with standard disk magnets using Flux 3D software, optimal solution ranges were very quickly determined.
Optimal diameter range and airgap range, as well as optimal height/ diameter ratio range and tilt tolerances were obtained.
Consequently, replacement of Hall sensors with new TMR sensors in a classic on-axis angular configuration was successful. We fully verified our previously-filed patent application on standard and redundant TMR position sensors together with materials, which allow us to prepare new patent applications. Additionally, we investigated not only a standard magnet disk shape, but some
special magnet shapes were investigated too. More details will be published later when our dynamic and multiphysics simulations are ready.

Vincent Marché graduated first in electronics, and then went on to refine his skills at business school. After more than 10 years in the industry, working on product marketing and sales of sensors, switches and electronic devices, he fell into a melting pot called electrical engineering simulation. Supporting FluxTM electromagnetic simulation software since 2009, he is passionate about the large fields of applications addressed by simulation tools and the application expertise of the users. He is constantly looking for solutions that address the innovation needs of electrical engineers. Since the recent acquisition of Cedrat by Altair, he manages the promotion of electromagnetic applications, electrical engineering and e-Mobility.
View all posts by Vincent Marché »