Radiation hazards have to be within standardised limits for many different hazard applications, e.g. human safety (HERP), fuel (HERF) and ordnance (HERO). Most radiation safety standards define maximum limits for field strength in frequency bands and form an equivalent exposure level in cases where multiple transmitters are active in any particular environment. The field levels that are excited by each individual source of radiation is expressed as a percentage of the applicable standard before all such contributions are summed to find a value for the total field, also expressed as a percentage. E.g. if 3 different radiators generate field levels relative to the applicable standard for their frequency bands of 30%, 15% and 20%, the equivalent exposure level for the combined field is 65% (the sum of the contributions). 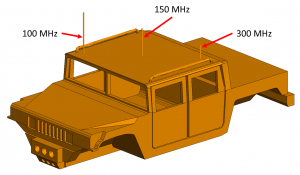 Three radiators on a vehicle, simultaneously transmitting at different frequencies

FEKO is well suited to the solution of field levels for individual frequency components of antennas that operate in complex environments. As FEKO operates in the frequency domain field levels are computed for each frequency and source of radiation in turn and have to be scaled by the applicable standard before they can be summed to depict equivalent radiation hazard boundaries or limits. This scaling and summing process may be processed with the Lua scripting language that operates within POSTFEKO allowing users to easily visualise the combined radiation hazard levels. 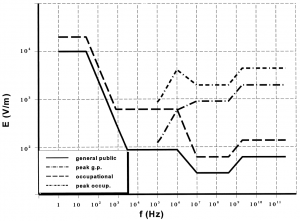 It is a simple task to request near-field computation in FEKO and to visualise boundaries of maximum allowable exposure levels for occupational and public exposure levels, as defined by ICNIRP guidelines. 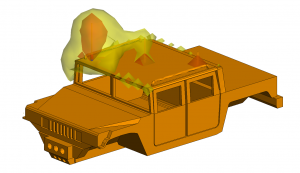 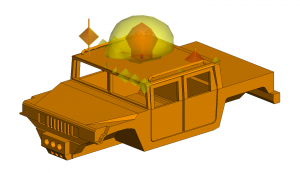 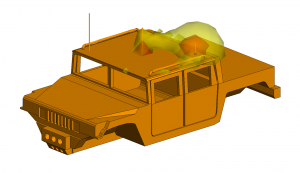 The field levels that were used to visualise the ICNIRP exclusion zones can be summed as prescribed by the ICNIRP guidelines to form a combined near-field result, which represents the radiation level at any particular point in space, expressed as a percentage of the standard.

This new representation of the combined contribution of all 3 antennas can be depicted as a plane, colored by exposure level, or as isosurfaces that represent the boundaries where the 100% level of the applicable standards are located. This information may then be interpreted in many ways, providing feedback on a design proposal for the communication system or to prescribe operational specifications for the safe operation of an existing system. 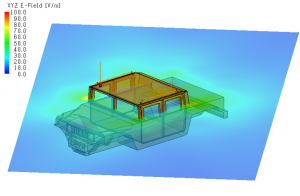 Summed field values in a plane, expressed as
a percentage of the applicable standard 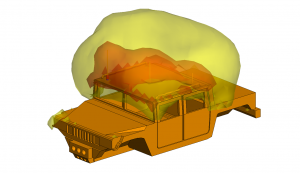 Isosurfaces for the equivalent summed field
levels, depicting the exclusion zones for the
combined radiation levels.