The analysis of the scattering properties of electrically large objects has always been a challenging problem. For highly accurate solutions to such problems the premier method is full‐wave analysis with the MoM or MLFMM (as available in FEKO). For electrically huge structures, an asymptotic method such as PO is required. For very large problems, the full‐wave methods result in prohibitive resource requirements, while PO may require an impractically large mesh for extremely large problems, and the PO run‐time grows exponentially with multiple reflections. To address these issues, FEKO’s Ray Launching Geometrical Optics (RL‐GO) method has recently been extended to allow plane wave excitations. RL‐GO is a ray‐based technique that models objects based on optical propagation, reflection and refraction theory. Ray‐interactions with metallic and dielectric structures are modelled using Huygens sources placed at each ray‐contact point on material boundaries. The ray‐launching process is easily controlled, based on the angular spacing (for localised sources) or transverse spacing (for plane wave sources) of the rays and the number of multiple interactions allowed.

The RL‐GO method (also called “shooting and bouncing rays (SBR)”) is inherently well suited to the solution of large scattering problems, for the following reasons:

Consider a corner reflector cut from a hollow PEC cube with 8 lambda side length. Figure 1 shows the geometry, as well as the two far‐field arcs along which the mono‐static RCS will be calculated. Figure 2 shows the corresponding RCS results. RL‐GO is compared with the MLFMM, which provide a very accurate reference. Very good agreement is shown, especially in light of the fact that RL‐GO required 4.6 MByte of memory, while MLFMM required 441 MByte, also with dramatically reduced runtime. This dramatic computational cost saving is a crucial enabling factor to solve very large problems. 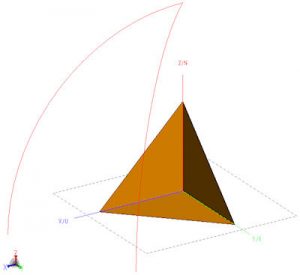 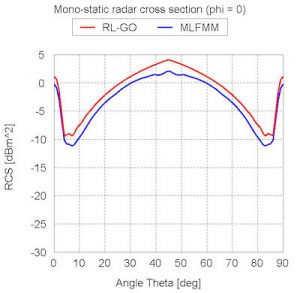 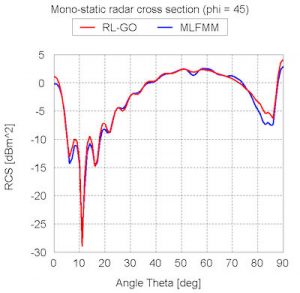 Now consider the mono‐static RCS of a general shape, namely an F5 aircraft. The aircraft is 14.5 m long and is solved at 1 GHz. Figure 3 shows the geometry. Two mono‐static RCS cuts will be calculated, as shown in the figure. Figure 4 shows the back RCS pattern cut. The MLFMM again serves as a very accurate reference. As can be observed, the RL‐GO again performs very well in this case. While the MLFMM required 6596 MByte, the RL‐GO only required 190 MByte. The result with the PO method taking only a single reflection into account, is also included as a reference. As the view from the back does not really involve multiple reflections, the RL‐GO and PO results are very similar, as is to be expected. 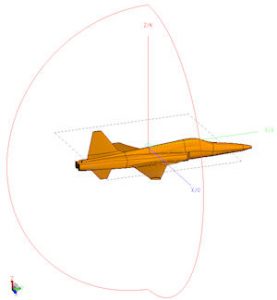 Figure 5 shows the RCS pattern cut in the roll plane. In this case, significant multiple reflections are supported by the structure in the range 0 < θ < 90° (from the vertical wing and body to the horizontal wings and vice a versa). Again the RL‐GO follows the MLFMM quite well. In contrast, the single‐reflection PO is markedly inaccurate in the θ‐range of 15° to 60°, as it does not capture the effect of multiple reflections. This clearly illustrates the ability of RL‐GO to model multiple reflection phenomena.

The benefits of the RL‐GO method for large structure, high frequency scattering analysis (RCS) have been demonstrated. Other ideal applications of the RL‐GO method include the analysis of lenses as well as reflector antennas. In such cases, the fact that the RL‐GO has been hybridized with the MoM in FEKO, becomes very important. Source antennas illuminating a lens or reflector can be modeled with the MoM, while the large structure can be dealt with very effectively with the RL‐GO, with coupling taken into account. 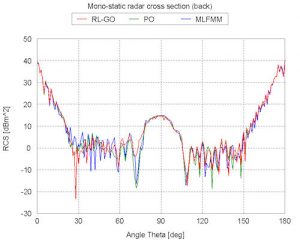 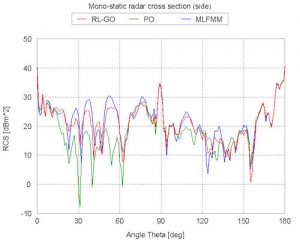