In August, a team of technicians, engineers, sailors, and divers spent a week testing and preparing for NASA’s new Orion spacecraft to splash into the ocean after its first space flight test in December. It will have traveled at speeds near 20,000 miles per hour and experienced temperatures as high as 4,000 degrees Fahrenheit. When the Orion Crew Module lands in the Pacific off the coast of Southern California, a U.S. Navy ship will be standing by to retrieve it and the astronauts on-board.

Much planning went into the design and build of the Orion. Several years ago, analysis and virtual testing of the splash landing was conducted by Altair ProductDesign, the engineering services arm of Altair Engineering, Inc., headquartered in Troy, Michigan. Physical tests are time consuming and expensive, so virtual testing was imperative to enable engineers to perform all of the design analysis and iterations required to achieve the highest performance standard.

Simulation of this event is computationally intensive and input sensitive. The speed and angle of impact as well as the impact’s effect on structures and materials are only a few of the physical variables. In addition, simulation input variables like mesh density, boundary conditions, and contact interfaces must be defined properly to ensure an accurate simulation result. This requires expertise and the use of computer-aided engineering (CAE) methods.

In the case of the Orion Crew Module, a number of loading conditions were considered: liftoff loads, launch abort loads, re-entry loads, and water impact landing loads. Of these, the Earth water landing load represented the largest loading conditions with respect to the integrity of the Crew Module structure. Since astronaut safety is dependent upon maintaining the integrity of the structure upon impact, the focus of the simulation team turned to the water landing event.

Finite element analysis (FEA) was chosen to predict water impact loads at splashdown. This method would provide more detail than what is available from physical testing. Still, physical test data was required to anchor the initial FEA models. Upon correlation of simulation data with the physical test data, accurate predictions could be expected.

Testing and Analysis
A full scale boilerplate prototype of the Crew Module was built for physical testing which included a number of data collection devices including accelerometers, strain gauges, inertial measurement units, and pressure sensors. To confirm the Crew Module flight trajectories, photogrammetric targets were used on the exterior of the prototype and high-speed video cameras were placed at strategic locations.

Altair ProductDesign team members were given the computer-aided design (CAD) files by NASA in preparation for the simulation analysis. HyperMesh®, a pre-processing tool available in Altair HyperWorks®, was used to set up the model with a uniform four inch by four inch average mesh size. Tied contacts were used to connect the outer surface mesh with the internal mesh structure to enable quick exchanges of the heat shield surface mesh to study mesh sensitivities. All of the internal structure of the Crew Module was modeled even though it was considered a rigid body in the finite element analysis in order to give it the correct moments of inertia, bringing it within one percent of the measured mass of the fabricated prototype. Locations of the physical test accelerometers were replicated in the model and positioned using the Crew Module coordinate system, with an internal RADIOSS® SAE 1000 filter for each accelerometer output. 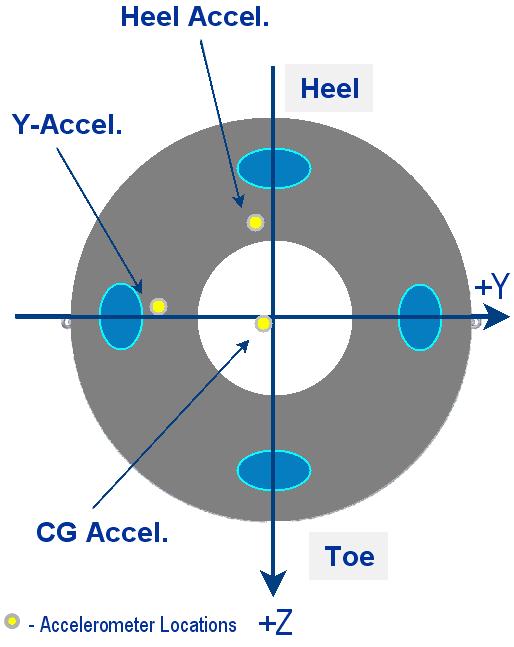 To model the water and air at the point of impact, a Eulerian mesh was created of a 30 foot by 30 foot section. A water depth of twenty-five feet and thirteen feet of air height was used to align with the physical drop test conditions. 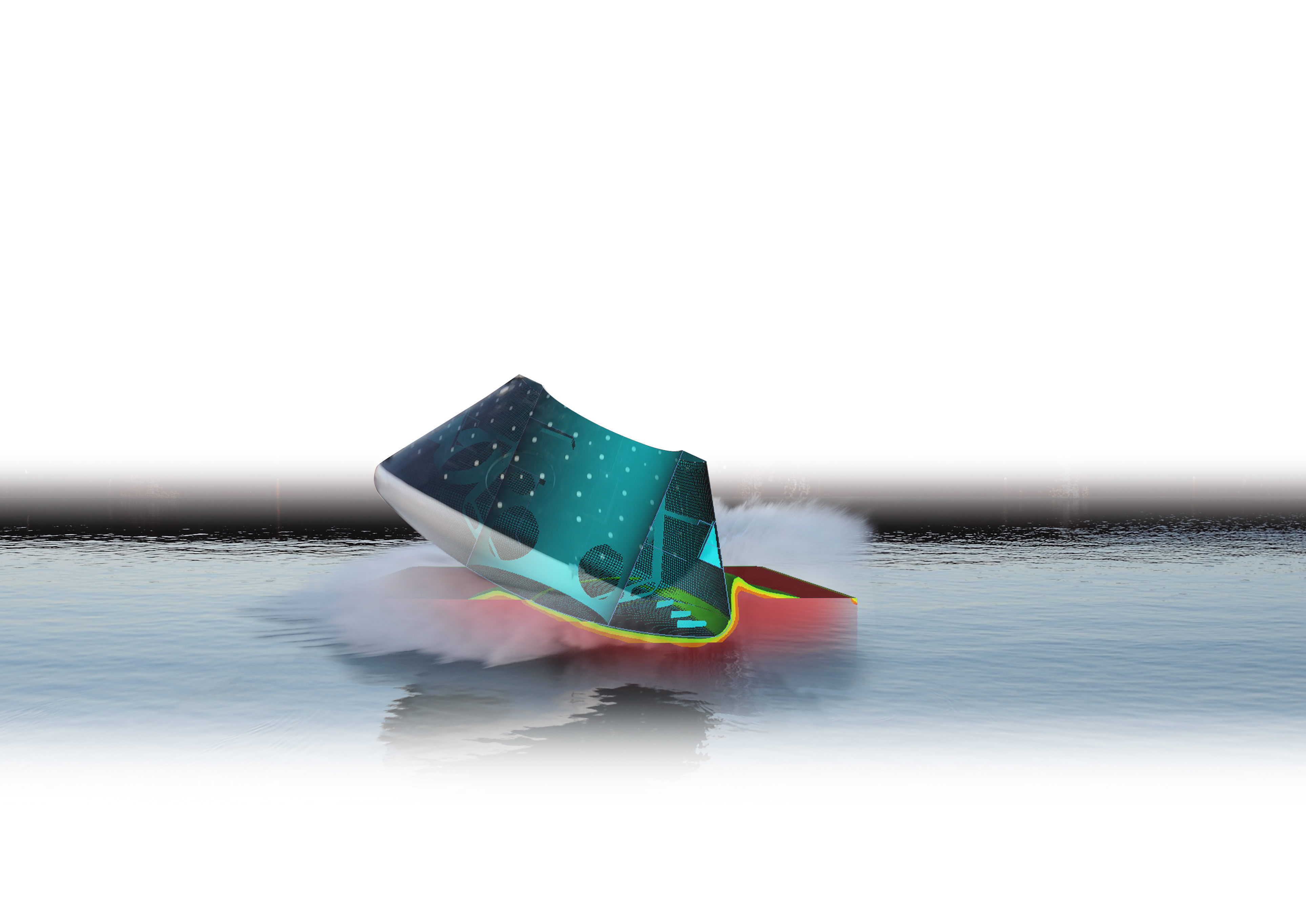 Because of air compression caused at the water to air boundary by the accelerating Crew Module, an initial eight inch distance between the Crew Module and the water interface was used for the simulation. This was done to establish the Arbitrary Lagrangian Eulerian (ALE) coupling contact interface. For the definition of contact between the Crew Module and the water, a penalty-stiffness-based-coupled Eulerian-Lagrangian (CEL) method was employed. Parameters for contact stiffness and activation distance were calculated using RADIOSS.

The baseline analysis included the creation of the initial ALE models used to predict “blind” results prior to the availability of test data. Once physical test data for trajectory and rotation were available, simulation results were compared and found to be quite similar. In contrast, acceleration data did not correlate well. 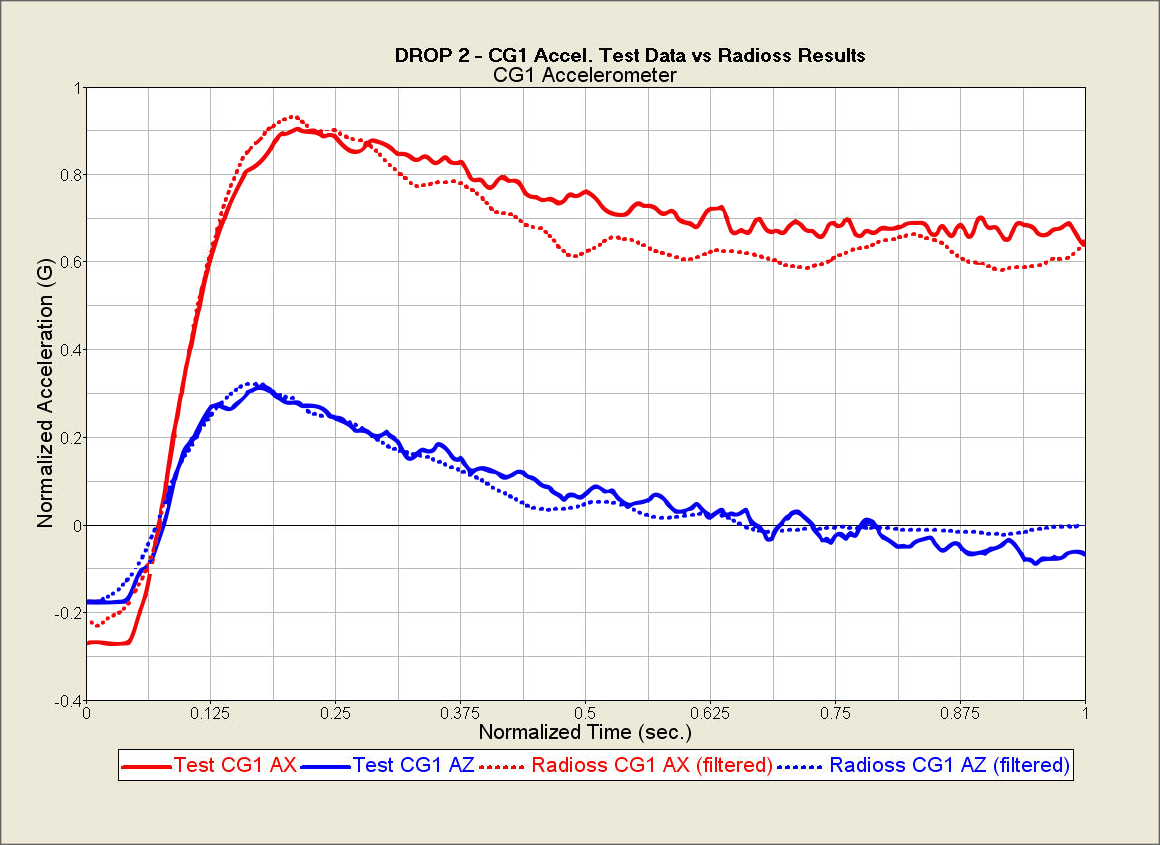 FEA modeling input parameters then needed to be modified and iterated to see if a closer alignment to physical test accelerations could be produced. Interface stiffness, mesh density, fluid pressure distribution, and boundary conditions were all variables optimized in the correlation exercise. The team ultimately determined that mesh density outweighed the other parameters in terms of importance. Mesh density was most sensitive in the direction normal to the impact surface (vertical), requiring the smallest mesh size, while the other two dimensions were less so. Faster runtimes were achieved by keeping the mesh size relatively large in the less sensitive dimensions, resulting in only a small loss of accuracy. Two inch by two inch by one inch fluid elements were used at the impact interface of the air and water, while the Crew Module mesh size remained four inch by four inch. The final correlated models showed very accurate predictions for the Crew Module trajectories and accelerations for the two different drop angles and velocities studied. 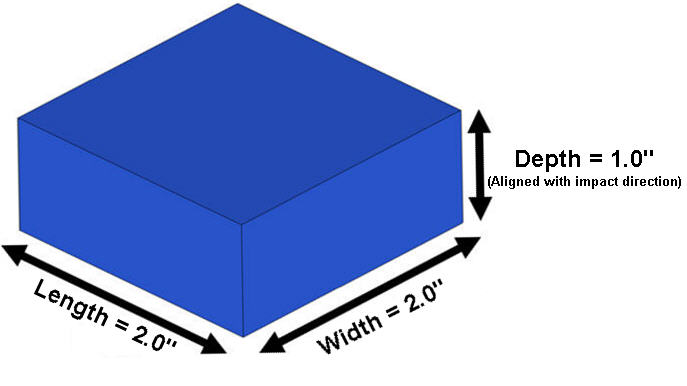 Because 2D shell elements were used to represent the Crew Module, its mesh was only varied in length and width, whereas the mesh of the fluid volume was varied in length, width, and depth. The Fluid Mesh column in Figure 5 denotes the length, width and depth of the fluid elements at the air/water interface. The other columns depict average length and width of the Crew Module mesh coming into direct contact with the water. Notably, a rule of thumb observed with respect to ALE simulations is that the Lagrangian solid structure (Crew Module) should not be smaller than the Eulerian fluid structure (the air/water model).

Acceleration data from the twenty models were compared to physical test data accelerations, and patterns and trends of mesh changes emerged. Several of the mesh matrix models showed good acceleration and trajectory correlation, and those with a finer mesh in the direction normal to the impact consistently produced the best results. However, if a single simulation model were to be developed to deliver accurate Crew Module heat shield pressures as well, more analysis would be required. The table below shows the large variations in the maximum heat shield pressures between the mesh matrix models that correlated well to the acceleration and trajectory data. The maximum pressure reported during the testing was 1.0 normalized pressure unit. 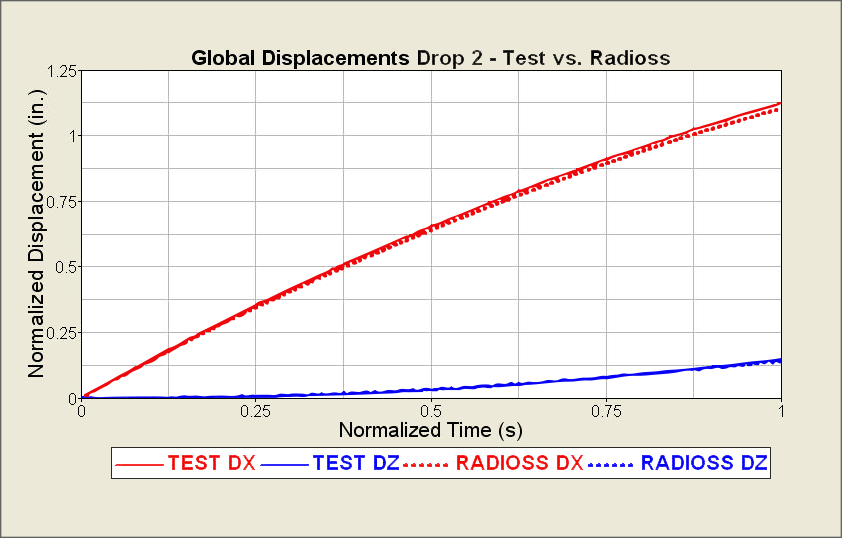 Conclusion
Without physical test data, the initial “blind” fluid mesh size selected produced accelerations which over-estimated peaks, illustrating the importance of using physical test data to anchor predictions. Mesh size ratios of Crew Module (solid) to air and water (fluid) were very important for obtaining good correlation with physical test data and the fluid mesh dimension normal to the impact was the most critical.. Simulation methods developed could be used to model water landing events for objects with comparable size, inertia, mass, and shape. Crew Module lateral velocities were not considered but probably should be explored in future studies. The length dimension of the fluid mesh in the direction of travel will likely also be an important variable.

Astronaut safety is dependent upon reliable structures and systems. Employing simulations early on in the design process helps engineers make more informed decisions and can provide information that would not otherwise be obtainable. Additionally, simulation can reduce costly and time consuming physical testing although final testing must be done to confirm that all objectives are met to keep our astronauts safe.

Acknowledgements
Mahesh Patel is an engineering manager and Drew Burkhalter a senior engineer, both with Altair ProductDesign in Irvine, California. This work was sponsored by the National Aeronautics and Space Administration (NASA) under contract to Alliant Techsystems. Special thanks to the entire Crew Module Water Landing Simulation Methods Development Team under the direction of NASA.