The advent of the sail, wooden hulled ships designed to circumnavigate the globe, the first steam powered ships and the transition from wood to steel all marked major turning points in ship design. However, naval engineers are finding themselves on the edge of a new revolution: organic design.

Currently, the majority of ship design processes are based on a limited set of design data for major structural design drivers. Despite the tremendous technological advances, some ship components are still designed using techniques developed with the first steel ocean liners in the early 20th century. As a result, ships are complex, bulky and heavy. These limitations, often solidified in the early stages of design, frequently lead to increased material and manufacture costs for the final product.

It’s easy to understand why some of this inefficiency exists; engineers are most concerned with ensuring the ship’s safety. Weight and long-term costs are often secondary considerations that occur late in the design process. Design optimisation, specifically around weight, is sparingly performed in the ship design industry, with only a minimum structural weight calculation being performed to demonstrate concept feasibility.

This traditional approach brings with it a number of issues, including undesirable structural arrangement constraints driven by high-level design decisions finalized early on, higher likelihood of costly iterative changes, and sub-optimal weight and manufacturing costs from poor design parameters. 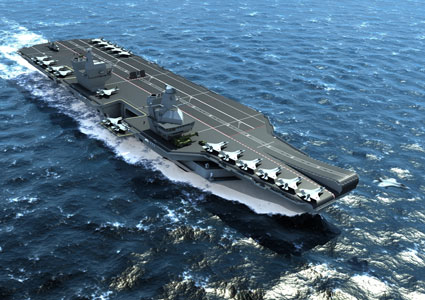 This is where organic design principles combined with the right technology have the potential to create a ship building design revolution. Aerospace and automotive engineers have been using optimization algorithms for decades to identify the design space, design constraints and the optimum values for design variables to satisfy them. This technology is readily available to the ship building industry; some cruise ship designers have already begun using increasingly sophisticated design approaches, resulting in an average weight savings of 10% compared to experienced engineers using the traditional approach.

Traditional design is based on prior knowledge, engineering experience and simple trial and error, a costly and time-intensive process that still may fail to identify optimal structures.

While finite element analysis (FEA) has been applied in the past, its uses have not reached the technology’s full potential; instead, it has been used to merely validate and refine existing designs. Through simulation-driven design, however, FEA can be integrated at the very beginning of the design process and assist in design creation, placing engineers one step closer to lighter, more efficient and cost-effective designs.

The potential of this technique was realised when the British Royal Navy was looking for a new aircraft carrier. It turned to BAE Systems to help realise one of the largest engineering projects currently being undertaken in the UK: the Queen Elizabeth Class (QEC) Aircraft Carrier. BAE Systems partnered with Thales UK., Babcock and the Ministry of Defence to form the Aircraft Carrier Alliance (ACA), a partnership that recognised the positive track record of simulation-driven design. To evaluate its potential under the unique requirements of naval design, ACA partnered with Altair ProductDesign for a pilot exercise on a section of the vessel’s structure.

Free-form or topology optimization is focused on identifying the areas of a given design space that are structurally important and those that are structurally redundant under specific design loads, objectives and constraints. This method is often used early in the design process while maximum freedom of design is still allowed. For ship building, topology optimisation can identify the best locations for bulkheads and where openings within those bulkheads can exist, ensuring maximum stiffness, while reducing weight by eliminating redundant material within the structure.

Topology optimisation was used on the QEC project to assess the double-bottom structure, which would be subjected to significant loads from external hydrostatic pressures in addition to the dynamic loads generated by large equipment items within the ship. Further complicating the double-bottom design was a ‘Confined

Space Access and Escape Arrangements Policy’ that required routing access openings through the floors in the double bottom. Topology optimisation enabled designers to identify areas of redundant structure that could accept access openings without compromising performance.

Similar to topology optimisation, free-size optimisation helps to indicate areas of structural importance and redundancy but acts to vary the thickness of the existing structure, as opposed to physically removing or ‘growing’ structure.

Shape optimisation varies the dimensions of structural features, similar to size optimisation; however, it acts to change the shape of a finite element (FE) mesh used to describe a structural feature, rather than changing a dimensional value within an equation or FE model. This could take the form of a radius corner on an opening, for example. Both shape and size optimization have the potential to be used on initial structures defined by topology or free-size optimization or may improve existing concepts derived by other means.

Although optimisation can be used at any stage in the design process, using these methods early in concept development will ensure the most efficient distribution of material and loads.

Optimisation not only reduces the structural weight of designs but also minimises stress concentrations, a leading cause of remedial work later in the design process.

For example, an opening in a bulkhead may require thickening of the surrounding plate in order to meet design targets, based on existing technologies. However, optimisation and simulation technologies engineered around organic design principles may identify that the same resulting structural integrity can be achieved by adjusting the cut-insteel shape of the opening. A simple shape change such as this saves designers from adding more weight and steel to a bulkhead, reducing fabrication and welding time.

This was exactly what occurred in the design of the QEC double-bottom floor access openings. Once topology optimization had identified the best locations, size and shape optimisation were employed to improve the stress response of the structure and minimise the steelwork mass required to meet the design targets. Applying optimisation methods, designers created a structure 9% lighter than the baseline design, while meeting all design targets. Conversely, the baseline design failed to meet stress targets. Optimisation work by Altair and the ACA went on to be used in the QEC’s flight control module, stern platform and transverse bulk-heads.

Growth of optimisation-focused design within the maritime engineering profession has been slower than its automotive and aerospace counterparts, as the ship building industry has traditionally not faced the same demands for design improvement. That said, increasingly stringent environmental regulation coupled with rocketing bunker prices is forcing owners and naval architects to seek out efficiency gains wherever they can.

In this respect, simulation offers some of the same benefits to the ship building industry as it does to car makers and aircraft manufacturers. Optimised ships can reduce material costs by identifying lighter, more efficient structures, which may also reduce fabrication costs associated with the complex structural designs created by traditional design principles. All of this can lead to fewer design cycles and reduced remedial work.

This article originally appeared in the June/July 2013 issue of Maritime IT & Electronics, published by IMarEST. www.imarest.org/mite