Automotive engineers have been using Computer Aided Engineering (CAE) to design vehicles and vehicle components for many years. CAE has expanded the design envelope for vehicle manufacturers and racing teams, leading to reduced costs and lead-time to explore a given configuration. Engineers interested in designing components that interact with fluids have traditionally used Computational Fluid Dynamics (CFD) to predict aerodynamic loading, internal flow rates and thermal interaction by considering time-averaged flow fields. CFD simulations conducted with a steady-state (Reynolds Averaged Navier-Stokes) methodology are intended to average out unsteady flow details in order to obtain the time averaged flow conditions. RANS solutions can give a good indication of how the components behave while exposed to a constant vehicle velocity for a single configuration.

Oftentimes, simulations of this manner are compared with wind tunnel data to ensure consistent behavior of the design. The problem is however, that these conditions do not reflect “on road/track” conditions. Designers that are interested in understanding component performance under realistic conditions may benefit tremendously from considering more complex physics during their CFD simulations. From a simulation standpoint, two ways of introducing more complex physics would be through better resolved turbulence or time-dependent vehicle motion.

The image below (Figure 1) represents the loading, in the form of average surface pressure, acting upon a nominal open wheel race car. The results were generated by conducting a steady state RANS simulation with a constant inflow velocity, and assumed rotational velocity applied to the tire/wheel assembly. This approach directly arrives at a time averaged flow profile for the vehicle while it is in that configuration. With these results, a design engineer can indicate a single value for coefficient of drag (Cd) and coefficient of lift (Cl). They may then make inferences on the performance of the vehicle based on the high pressure present on the upper side of the rear wing. The results show a relatively smooth and symmetric high-pressure region on the rear wing that will produce a heavy down force on the rear tires. While these results are valuable, they may not tell the complete story regarding how that loading changes as a function of time. In order to understand the time-dependent loading on the vehicle, a transient simulation must be conducted. The transient approach provides information regarding the fluctuating loads that arise as a result of the highly turbulent flow around the vehicle. However, it is still limited to a single stationary configuration of the vehicle. 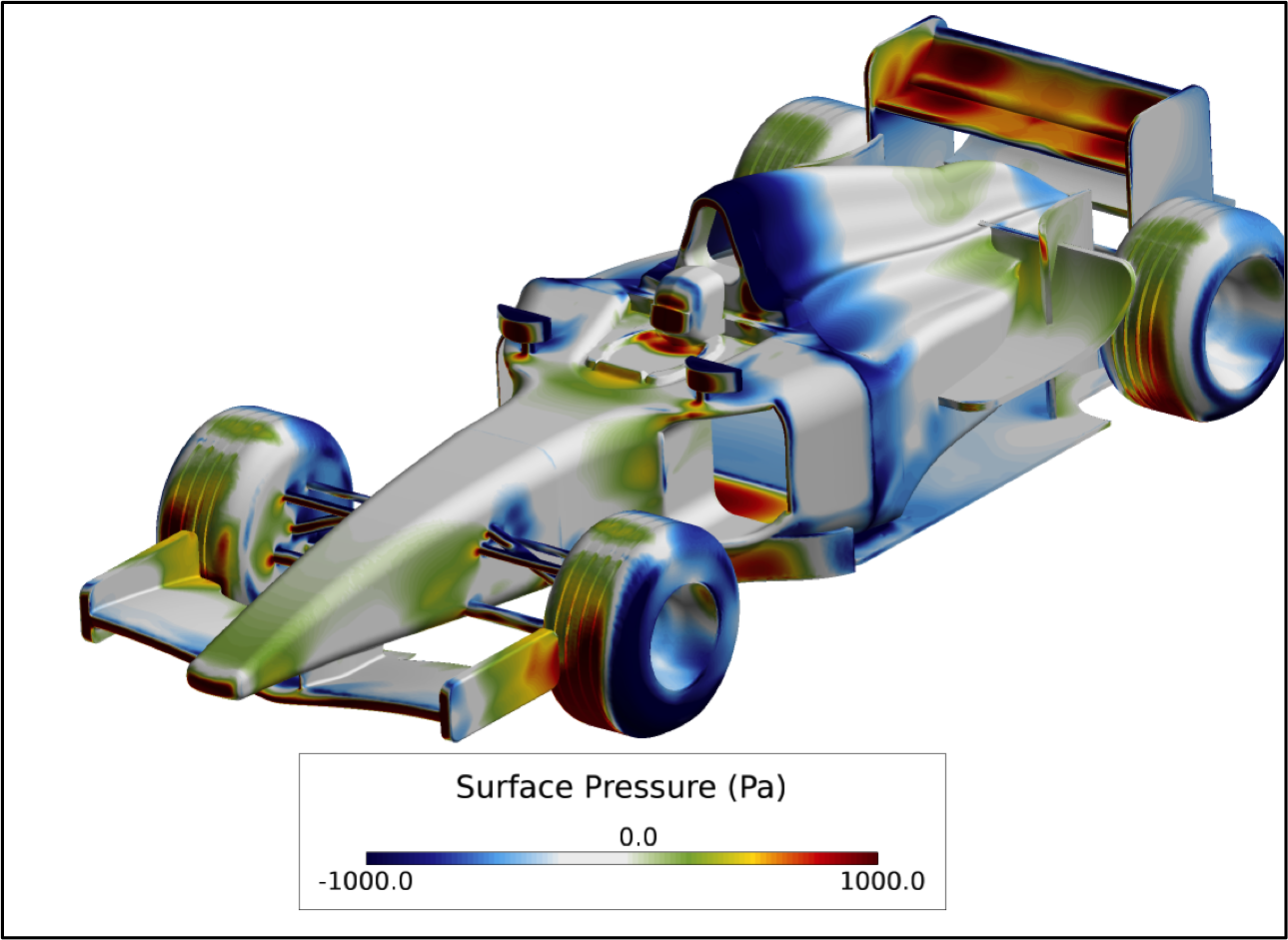 To improve the realism of the model for an on-road configuration, HyperWorks’ CFD solver AcuSolve is able to simulate the physics of the flow as the car undergoes an actual driving maneuver. When using this approach, the orientation/speed of the vehicle changes in time and the impact of that change in configuration is captured by the simulation. This type of non-stationary simulation can be combined with a high resolution turbulence modeling technique to capture the fluctuating loads associated with both the maneuver as well as the transient turbulent structures.

To demonstrate how the loading acts during non-stationary driving conditions, a simulation was designed to replicate how the vehicle prepares for and completes a basic turning maneuver. In the model, AcuSolve is used to simulate the open wheel race car decelerating as it approaches a corner, performing a constant velocity turn reaching a maximum of 10⁰ yaw angle and accelerating out of the corner back to speed. The transient simulation was conducted using the Delayed Detached Eddy Simulation (DDES) turbulence model in order to investigate the flow structures in the wake of the vehicle and how they impinge on the vehicle during the maneuver. During the simulation, the traction forces and other various physical properties acting on the vehicle are reported to the designer and in this case, are shown to be highly variable. The time-dependent solution shows that the forces on the vehicle and in particular on the rear wing change as a function of time, even during the constant velocity period. The image below (Figure 2) demonstrates the same contour plot as shown from the steady state simulation but with results taken from the transient solution during the constant velocity period. It is clear from the contours of surface pressure that the forces acting on the vehicle differ considerably at that moment in time compared to the RANS solution, and therefore will cause changes in the drivability of the vehicle. 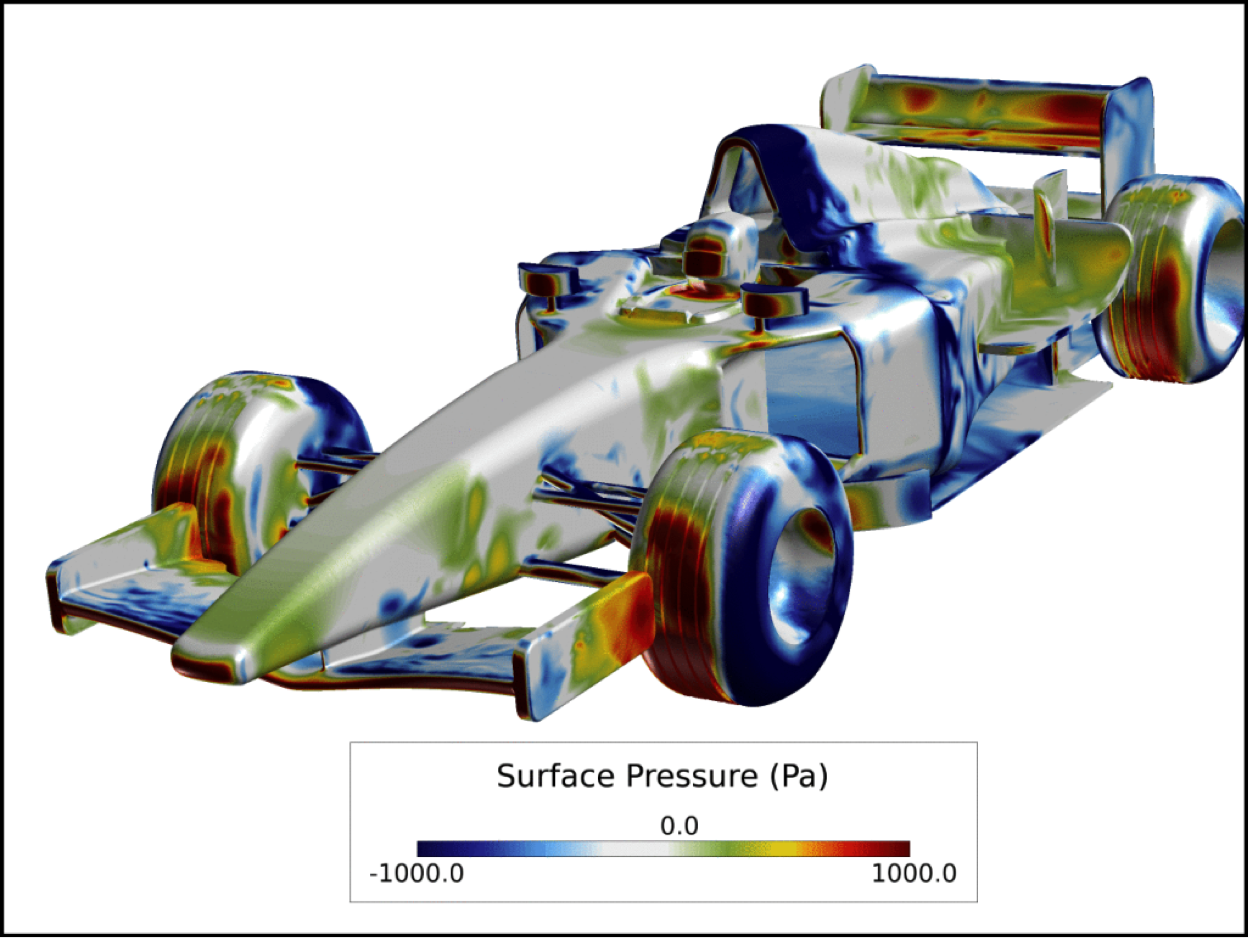 Figure 2: Surface pressure acting on the exterior of the vehicle prior to entering the turn.

As the vehicle approaches the turn, the drag force reduces significantly (in upwards of 1200N), while still fluctuating due to the unsteady flow conditions. Once the vehicle undergoes the actual turn, the simulation shows a large oscillation in the traction forces and increased wake structures aft of the front wing. Once the vehicle has exited the turn and accelerates back to full speed, the drag force returns to the starting position, while the lift force increases in the negative direction (giving rise to downforce) to a slightly lower value. This indicates that the simulation may need to be run further in time in order to recover the original loading. The loading is shown in Figure 3 for each portion of the simulation, depicting the traction forces as a function of time. At the apex of the turn, the contours of pressure on the vehicle are clearly distinguishable compared to the RANS solution. Figure 4 shows the vehicle at the apex of the turn from three different angles. These results demonstrate the highly transient nature of external aerodynamics, specifically for racing and vehicle design. 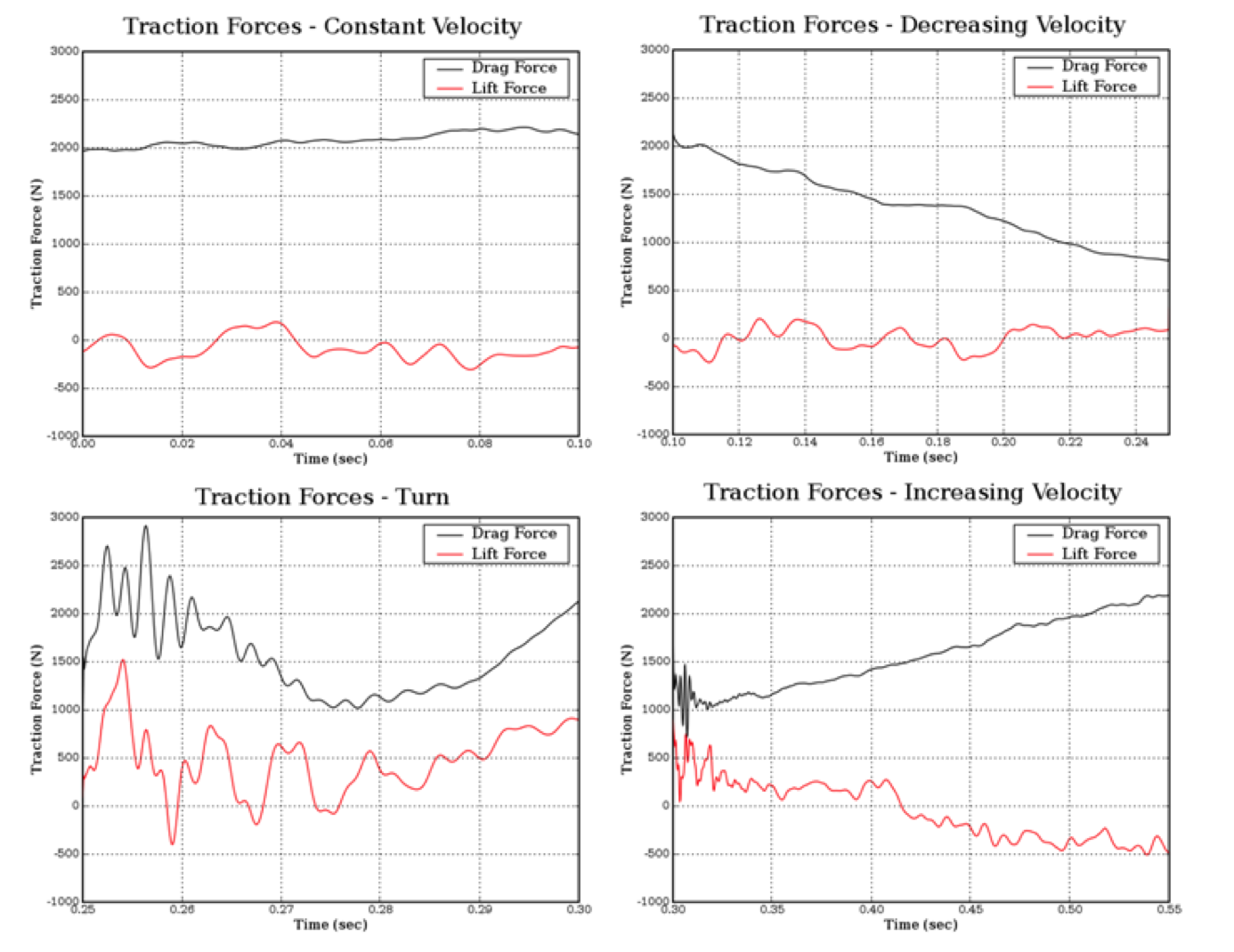 Figure 3: Time trace of traction forces acting on vehicle body and wheels during the four stages of the turning maneuver. 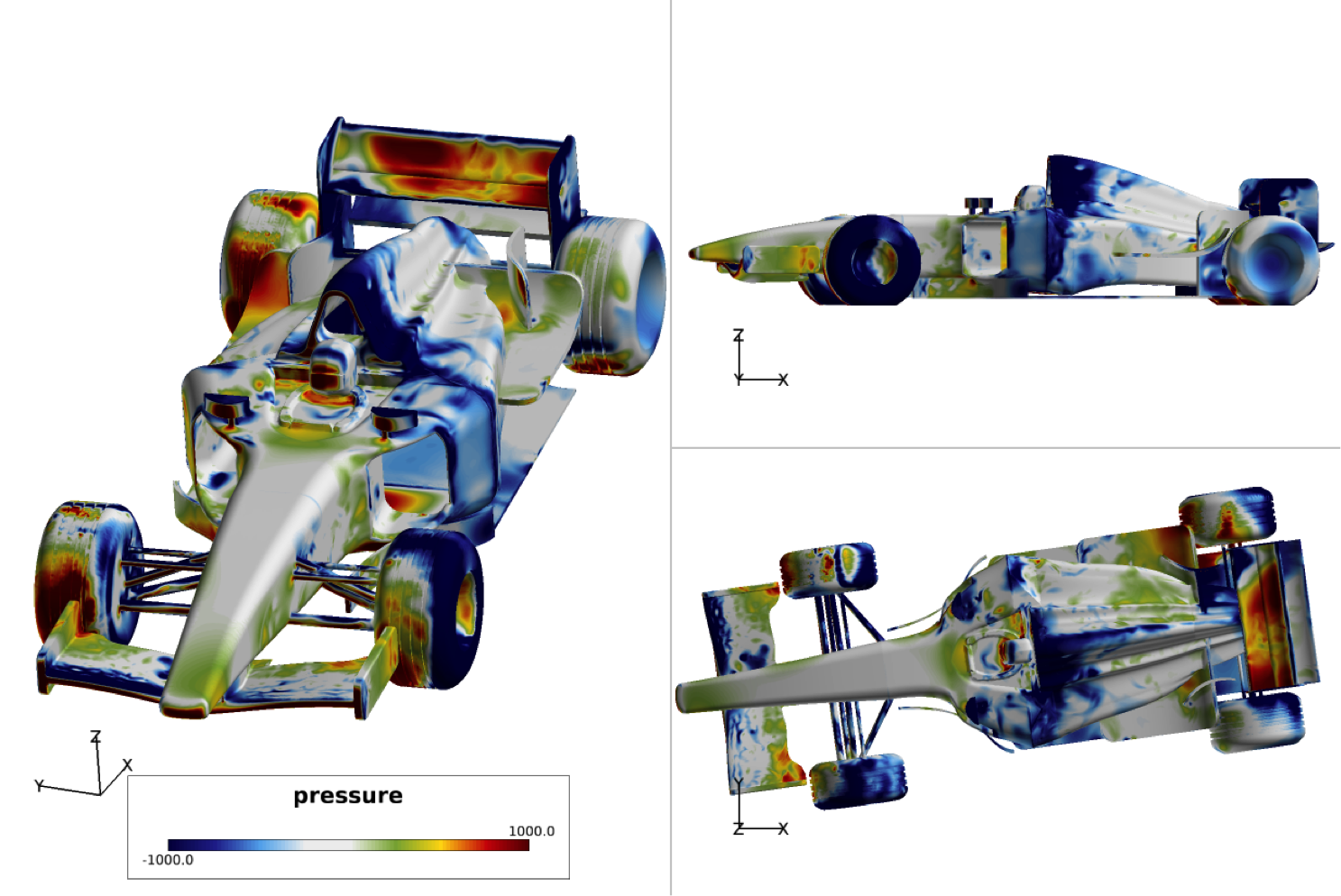 Figure 4: Three window view of the surface pressure acting on the exterior of the vehicle at the apex of the turn.

When it comes to automotive engineering, designers have a vast suite of tools that can take the form of many different types of simulations. Engineers interested in basic mean flow characteristics for component design will obtain significant information from a steady state simulation, but at the cost of unknown transient behavior. If the nature of the flow is unsteady, which is often the case with bluff bodies traveling at high speed, considering real-time flow phenomena may provide additional insight into the vehicle’s design. Considering the real-time vehicle trajectory along with advanced turbulence modeling can make the difference between a design that performs optimally and one that does not. AcuSolve is architected to investigate both simulation approaches, but when transient behavior needs to be resolved, AcuSolve has the tools needed to scrutinize the design in fine detail. 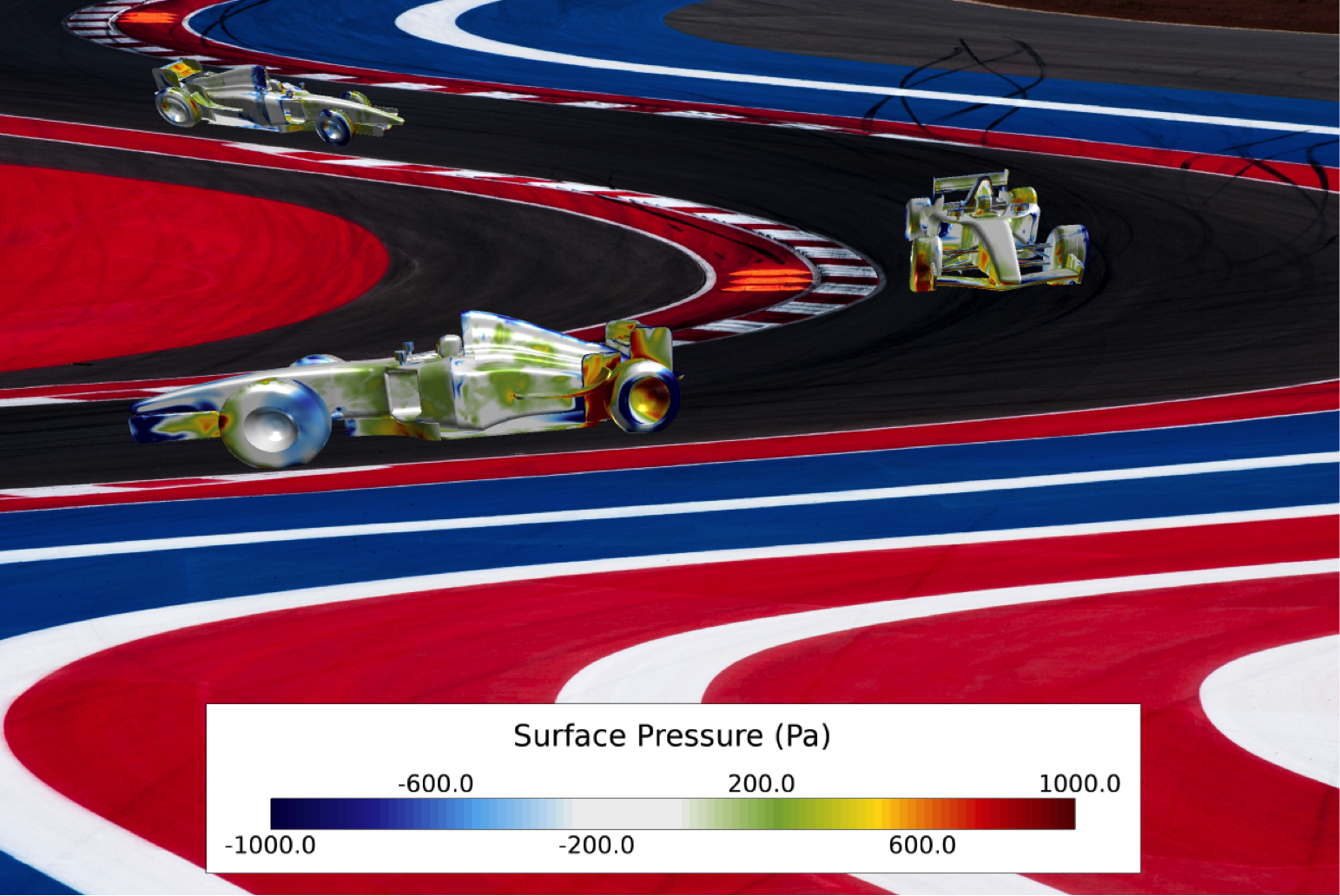 Michael Barton
CFD Application Specialist at Altair
Michael Barton joined Altair in 2013, and is currently working as a CFD Application Specialist for the HyperWorks® Core Development Team. He has five years of industry experience working with and developing CAE software related to fluid dynamics. His current role includes contributing to the CFD solver AcuSolve by assisting with the program management duties, conducting high-end benchmarks, testing new features and developing marketing material. Michael has authored two conference proceedings since joining Altair and has participated in several internal/external webinars. He holds a master’s degree in mechanical engineering from Northern Arizona University in Flagstaff, Arizona.

Michael Barton joined Altair in 2013, and is currently working as a CFD Application Specialist for the HyperWorks® Core Development Team. He has five years of industry experience working with and developing CAE software related to fluid dynamics. His current role includes contributing to the CFD solver AcuSolve by assisting with the program management duties, conducting high-end benchmarks, testing new features and developing marketing material. Michael has authored two conference proceedings since joining Altair and has participated in several internal/external webinars. He holds a master’s degree in mechanical engineering from Northern Arizona University in Flagstaff, Arizona.
View all posts by Michael Barton »