It doesn’t seem so long ago that passenger safety and vehicle crashworthiness were the battleground where automakers differentiated their products. Now, as many OEMs have created product development systems that rely on a CAE-driven strategy to deliver excellent passive safety performance, it appears to have taken a backseat to miles-per-gallon. Almost every car commercial touts greater fuel efficiency and seeks to validate the manufacturer’s environmental credentials.

Both safety and gas mileage advances have been pushed by regulation and pulled by consumer demand. Now that the United States has set the 54.5 mpg Corporate Average Fuel Efficiency (CAFE) standard for 2025 and lower CO2 emissions have been mandated in Europe, we are entering a new era of increased challenge that could lead to significant change in the way cars are designed and constructed. OEMs and suppliers are reviewing every component and considering the technologies available to meet these new demanding standards, including investment in engineered plastic and carbon-fiber-reinforced plastics (CFRP) that offer high stiffness-to-weight and strength-to-weight ratios.

Reducing vehicle weight is not the only approach followed to increase fuel efficiency, but it is particularly attractive because of the unique decompounding effect gained by reducing weight. A lighter vehicle as result can be equipped with a smaller engine, transmission, and suspension with further weight reduction while maintaining vehicle performance. So, we know composites can help us create a lightweight vehicle as part of a mixed-material solution, but how do we achieve crashworthiness expectations? 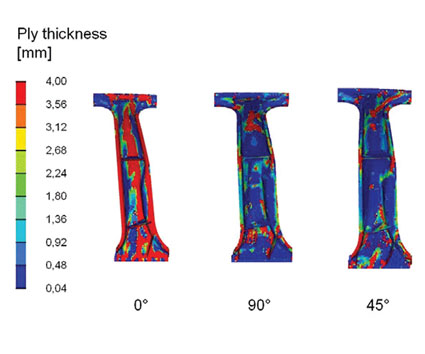 In theory there is no safety trade-off when replacing a traditional metal part with a well-designed composite part. Consider the enormous design flexibility achievable, with potentially lighter composites and the superior specific energy absorption; this makes their selection compelling for crashworthiness application.  In practice engineers have some reservations in using composites for key structural load-bearing parts. It’s not just the auto industry’s metal-centric infrastructure, or because of cost, limits in rapid manufacturability and production levels of CFRP. The hesitation is because of the radically new global vehicle architectures and design methods that composite utilization (beyond non-structural body panels) requires. This is amplified by the fact that the industry has limited understanding of these materials and their failure implications during crash.

On the contrary, composites are used broadly in aerospace applications, constituting about 50 percent of some modern airliner structures. Whereas crashes are, thankfully, a rare occurrence for an airliner, they are inevitable for a percentage of automobiles produced This means that the cost to repair a structure is more significant for the automotive engineer to consider in making certain that a customer can afford to insure and maintain the vehicle.

This concern is among the reasons that crashworthiness – the science of energy and component failure management – is key. Using composites is about designing a strong structure that also deforms in a controlled and predictable manner through a calibrated energy-absorption rate that both assures the integrity of the passenger compartment and prevents serious injury to its occupant from high maximum decelerations. 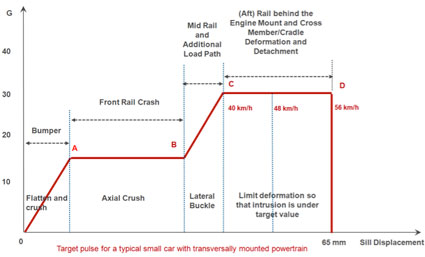 These requirements have led to the design of finely tuned crumple zones where certain structural parts are subject to extensive plastic deformation, failing in an accordion-type fashion. Based on the impact severity, selected metal components are scarified, deforming by buckling/folding in an orderly manner, channeling the load as designed to other components, while at the same time exhibiting post-crush integrity.

CFRP, the most prevalent alternative to metal for lightweight structural application in race cars and high-end sports cars, exhibits several energy-absorbing modes during crush, all related to the vast range of new failure mechanisms to which they are subject. Phenomena such as matrix crazing, fiber fracture, fiber-matrix de-bonding, de-lamination and interplay separation are not as well understood mathematically and traditionally are characterized by only empirically curve-fit models. 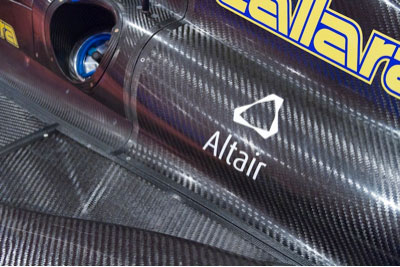 According to literature the composite’s specific-energy absorption itself varies up to a factor of two because of how dependent CFRP are to the geometry of the part, fiber architecture, process condition, failure initiator and crush speed. All these factors are compounded with each other making the characterization of material beyond elasticity difficult. Most of the non-proprietary test data available were obtained through quasi-static loading on axis-symmetric tubes or other simple geometry, and they are not representative of the dynamic, mostly off-axis loads experienced in crash. This also presents another barrier to broader adoption.

For CFRP, the load rises rapidly in the initial stages of the load–displacement curve, resulting in peaks for energy absorption and deceleration that makes the high crash-energy absorption values of advanced composites, shown in the chart below, not ideal for a crashworthy structure. The rate of energy absorption is a dominant characteristic. 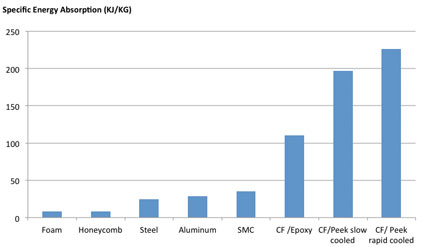 CFRP under impact fails through a brittle mechanism, resulting in the pulverization of the failing area. While potentially this has some benefit when designing smaller cars (because it results in a larger usable crumple zone), in reality brittle failure is mostly a concern. The structure is less forgiving than more traditional metallic assemblies known for their ductile response to the many crash load cases for which a vehicle is designed. Complex metallic structures in a vehicle show a predictable collapse dynamic, especially because designers well understand the techniques at their disposal to initiate failure in certain areas, using trigger points like thickness changes and specific patterns for beads, bevels, holes. Even the welding used to join vehicle subcomponents is part of the crashworthiness design.

This raises another relevant design aspect to consider in any potential mainstream usage of CF in automotive. Understanding of the different joining techniques available for both composite-to-composite and composite-to-metal joining and how to tune their failure is essential to the performance of the system. Any adhesive bonding or mechanical fastener used for joining composite should exhibit strength similar to that of the pairing parts they are connecting; otherwise the advantage in using an expensive optimized composite structure is potentially limited.

CFRP offers an exciting opportunity for automotive. As time passes, its knowledge and applications will become an asset to automotive players, and its potential will fully emerge through new mainstream usage. It is interesting to observe that even the $229,000 McLaren MP4-12C, a car conceived by a company that pioneered CFRP monocoques in Formula 1, uses a CFRP passenger MonoCell with replaceable aluminum structures attached front and rear to absorb crash loads.  This example indicates that, as we seek to achieve lighter and safer vehicles, a mixed-material solution that uses optimization to help us to place the right material in the right place, will likely be the industry direction.