More than 86,000 terawatts of solar power reach the Earth’s surface each year. Theoretically, that’s enough energy to satisfy the entire world’s energy demand 1000 times over (in 2008, the world consumed a little over 16 terawatts of energy). However, only a tiny portion of that energy actually has been converted into usable electricity (for reference, only 1.81 TWh of solar energy were produced in the United States in 2011). Moreover, while that number has not significantly changed over the last millennia, global energy consumption has increased steadily over the past century, particularly since 1950. 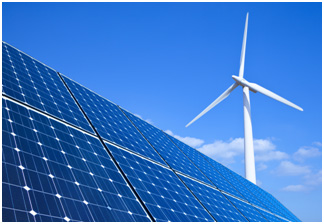 The good news is that thanks to the largest investment in clean energy in American history, renewable energy generation from wind, solar and geothermal sources have nearly doubled in the United States since 2008 (as an example, produced onshore wind energy went from 55 TWh in 2008 to 119 TWh in 2011), and the cost of these technologies is declining rapidly. Simulation and optimization, along with the research and development of new advanced materials, are key factors in making renewable energy sources successful and cost-effective.  Let’s see how with a couple of examples.

Recent trends in wind-power technology are focusing on increasing power output through an increase in rotor diameter. Designs with 100-meter blade length are now being considered to provide more operational efficiency. However, the increase in blade length accompanies a significant increase in mass. Additionally, the gravitational loads on the blade add to the aerodynamic forces and can induce large stresses that give rise to durability, fatigue and buckling concerns. Greater care needs to be applied to the design to ensure that the blade is structurally efficient, with stiffness where required, but eliminating material where it is not needed.

Topology optimization is used to determain the internal structure of the blade.

Topology optimization is first used to determine the optimal internal structure of the blade to give it the required stiffness, rigidity and frequency response with the least amount of weight. Loads include gravity loads, centrifugal loads and fluid-structure interaction (FSI) loads resulting from wind loading on the blade, calculated by Altair’s CFD code, AcuSolve. The optimization results provide a design proposal of spars and shear webs that then are sized using optimization methods with constraints on frequency, displacement, composite strain and buckling.

Once the internal structure is defined, the turbine-blade skin design begins. The blade will have a composite skin, and composite ply optimization methods are used to determine the optimal ply shapes, identify ply drop-off zones and laminate boundaries. The model set-up includes the use of unidirectional, bi-axial, and tri-axial ply materials, as well as foam-core and gel-coat materials. The goal of the optimization is to come up with optimized material distributions to meet design constraints while minimizing mass. In other words, through optimization, we can establish the multiple ply shapes and their coverage areas that are needed for the unidirectional, bi-axial and tri-axial plies. The result of the first-stage optimization analysis is a set of thickness plots showing the thickness variations for each type of ply material considered.

In summary, the optimization process determines the optimized ply shapes for each ply type, their location on the blade skin, the optimal number of plies of each shape and type and the optimal stacking sequence of the plies. Weight savings of 10–30 percent are common with this method.

The optimization design process allows the computer to efficiently sort through the many design variables that exist and quickly determine the optimal structural configuration. This allows designers to have significantly more insight into the physics of the structure and thereby make better-informed design decisions. The optimized design becomes a great communication vehicle to get all of those involved in the design of the wind-turbine system together to discuss the optimization analysis results and how to best use these results to design a fully functional, yet weight-efficient, wind-turbine system.

The second example comes from Luxon Engineering, an Altair customer and  product-development company based near San Diego, Calif. Luxon’s customer wanted to expand the geographic locations where its solar panel system could be installed successfully, so it asked Luxon to develop a more robust support structure to ensure that the system would survive the seismic, wind and snow loading that the product was likely to encounter in various parts of the world. 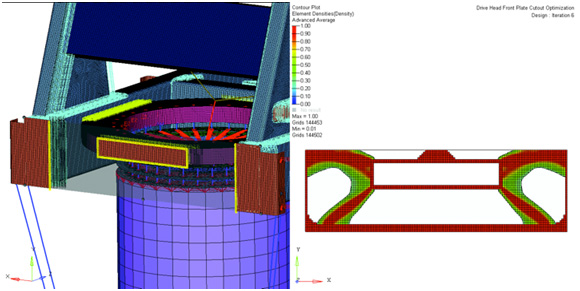 Topology optimization produced a reduction of mass in a drive-system linkage within a large-scale solar panel system.  This system uses a dual-axis tracker to continuously align its panels with the sun.  Early prototypes employed a weldment design that was very cost-ineffective for production.  Designers moved toward a sand-cast manufacturing technique to reduce costs and open up the opportunity for topology optimization.

Topology optimization also was used in determining the overall load paths within the solar drive structure, and a weldment structure was developed based on this result. Size and shape optimizations were carried out on structural members to maximize stiffness and minimize mass within manufacturability limits (discrete design variables for size and thicknesses).

Using topography optimization, the sheet metal structures supporting the solar cell array were optimized to maintain stiffness within limits to retain lens-to-cell alignment.  The optimized bead-forming pattern allowed the use of thinner materials while maintaining necessary stiffness and manufacturability.

Fin length, thickness and taper optimization also were performed for the heatsinks handling heat rejection opposite the solar cells. The heatsinks were optimized to minimize cost for a given efficiency.  Further analysis was performed on the heatsinks using the AcuSolve CFD application.

The Topology Optimization Process Utilized in Designing the Crank Arm

The wind turbine blade story has been taken from a WindPower 2012 presentation and an article published on WorldWind Technology Magazine in 2012.

Simone Bonino
Vice President of Marketing - HyperWorks at Altair
Simone joined Altair Italy in 2001, and is currently the Vice President of Product Marketing at Altair. He has over 20 years of experience in the PLM market, particularly in the field of manufacturing simulation and business development. His current role includes overseeing the global marketing strategy for the extended HyperWorks brand, integrating contributions from the other Altair divisions, and building a cohesive message with dynamic marketing materials for the CAE and PLM market. He holds an associate degree in mechanical engineering from the Istituto Tecnico Industriale (ITI) Edoardo Agnelli in Torino, Italy.

Simone joined Altair Italy in 2001, and is currently the Vice President of Product Marketing at Altair. He has over 20 years of experience in the PLM market, particularly in the field of manufacturing simulation and business development. His current role includes overseeing the global marketing strategy for the extended HyperWorks brand, integrating contributions from the other Altair divisions, and building a cohesive message with dynamic marketing materials for the CAE and PLM market. He holds an associate degree in mechanical engineering from the Istituto Tecnico Industriale (ITI) Edoardo Agnelli in Torino, Italy.
View all posts by Simone Bonino »

A Step Towards Understanding Brain Disorders