The number of people with medical implants, such as pacemakers, replacement for various joints and monitoring devices are increasing steadily. At the same time, more and more people undergo MRI examinations for diagnostic purposes. During an MRI scan, strong RF fields are induced on the implants, which often contain or are made of metal. As a result, the local SAR values and temperature increases in the proximity of the implant may exceed safety limits, which may result in patient being burnt. For this reason, rigorous compliance testing is required in order to certify an implant to be MRI compatibility.

If an implant is being designed to be used in an MRI system, localised SAR and temperature increase must be quantified to ensure that the device is safe. For this case study, we will investigate these parameters for a hip implant in a 1.5T body coil. The FEKO project files and script to calculate the temperature increase shown in this example can be downloaded Here. 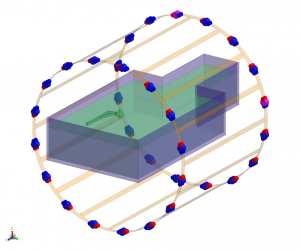 Phantom with hip implant in an 1.5T MRI coil (the RF coil shielding is not shown).

During an experimental safety test setup shown above, the implant is positioned in an ASTM phantom filled with gel that has averaged material properties similar to those of a person. The implant is positioned near the edge of the phantom where the field gradients are highest to try estimate a potential worst case scenario. The phantom with the implant is placed in an MRI scanner and the temperature rise is monitored. An analysis like this is straightforward to investigate by means of simulation. The image below shows the local Specific Absorption Rate (SAR) at 64 MHz when the MRI coil accepts a power of 38 W, of which 30 W is absorbed in the phantom gel. The implant has a strong influence on the fields, and localised peaks in the SAR distribution can be seen at the tips of the implant.

We can now perform a thermal analysis to calculate the temperature increase for the setup. The implementation is based on the classic Pennes Bioheat Equation, using an explicit solution to the finite spatial and time derivatives. The equation takes into account heat transfer through absorbed EM power, thermal conductivity, perfusion and metabolic heat generation. Convection and thermal radiation boundaries are used to describe the heat transfer to the surrounding air at ambient temperature.

In this case, the metabolic heat and blood perfusion are set to zero for the gel and the simulation is initialised with a temperature of 293.15 K. The temperature distribution after 600 s (which could be a typical duration of an MRI scan) shows a temperature increase up to 0.8 K near the tip of the implant.

The temperature-time plot below shows the rate at which the temperature increases at 2 different locations: near the tip of the implant where the maximum heating is seen and at the center of the coil. It is clear that thermal equilibrium has still not been reached, and that the temperature will continue to increase after 10 minutes. 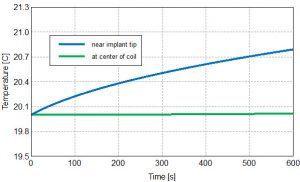 Temperature increase near the tip of the implant.