Vincent Marché
Vincent Marché graduated first in electronics, and then went on to refine his skills at business school. After more than 10 years in the industry, working on product marketing and sales of sensors, switches and electronic devices, he fell into a melting pot called electrical engineering simulation. Supporting FluxTM electromagnetic simulation software since 2009, he is passionate about the large fields of applications addressed by simulation tools and the application expertise of the users. He is constantly looking for solutions that address the innovation needs of electrical engineers. Since the recent acquisition of Cedrat by Altair, he manages the promotion of electromagnetic applications, electrical engineering and e-Mobility.

Nowadays, it is more and more difficult to design electro-technique devices without having a look at thermal stress. In more and more applications (more electric vehicles, more electric aircrafts, …) designers need to reduce weight, cost, increase efficiency, and keep the same security factor. One possibility is to increase current for the same device, needing to check how to draw away the heat. This is why the classical approximations need to be cross checked with complementary analysis. These new tools have to be rapid and accurate in order to run parametric and even optimization analysis. There is also a need for fast model in order to check robustness versus driving cycles. The goal in this article is to review rapidly the different methods available, depending on the accuracy required and the solving speed.

What is thermal analysis?

Thermal analysis reveals the impact of power supply on the heat of the different components of a device. A conventional project will include: one or more power supplies, conducting bodies, convection and radiation between a surface and a fluid. In the fluid you may have laminar flow or turbulent flow.

One benefit of this type of computation is the temperature dependency of all material properties: magnetic materials lose their magnetic property at Curie temperature, resistivity increases with temperature. 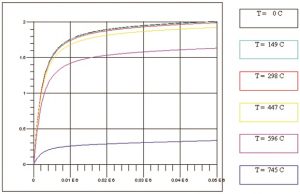 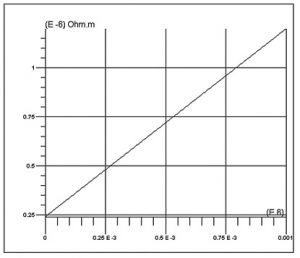 Thermal conductivity and the thermal capacitance also vary versus temperature (especially around the Curie temperature). 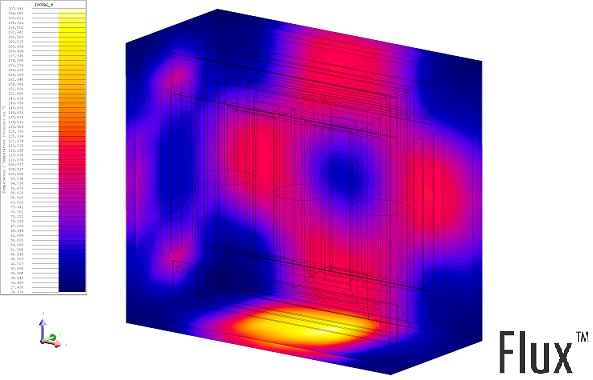 Isovalues  of current density on the tank surface.

“Induction treatment has been considered as a key industry and CEDRAT delivered its first    magnetothermal analysis tool under Flux 2D in 1986.”

The goal of the equivalent thermal circuit is to split the motor in different areas where the temperature is assumed to be constant. With a reduced number of nodes you can already have a good estimation of what is going on thermally in your motor. The power transmitted from one point to another is then simulated by a thermal resistance. The losses are represented by current supplies. The current in each resistance corresponds to the heat power transferred from one node to another node. The convection and radiation is taken into account through dedicated resistances. You can deduce the temperatures in each node corresponding to steady states. You also have the possibility to add capacitances in order to take into account transient thermal.

Just to give an example, you will see below the circuit corresponding to a Prius like motor. 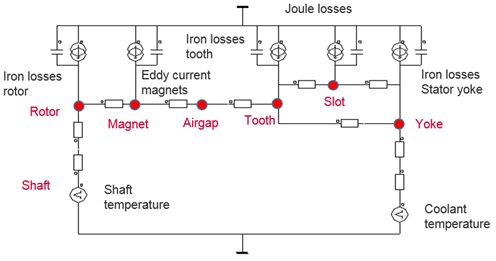 What is interesting is that, to compute the equivalent thermal resistance, you can use analytic formula, or thermal FEA analysis.

The benefit of this method is the quite ease of use, and the solving time which is very fast. The counter part is that it requires good knowledge of exchange coefficients, especially convection and radiation. You often need to calibrate the model with measurements or a more precise method explained below. But once the model is calibrated, even for another motor, you can benefit from your acquired knowledge to predict what will happen.

Another way of analysing the thermal behaviour of your motor is the use of FEA, like Flux 2D/3D software. The main benefit is a better understanding of the exchange of temperature inside the motor itself. Again, you will need to have knowledge about quite the same information as for the equivalent thermal circuit method: exchange coefficients on the boundaries. The key points are the following:

The airgap is often modelled with an equivalent thermal conductivity depending on various parameters: the velocity of rotor, the speed of airflow (fan or not on the shaft), liquid, … The modelling of the coil depends on the accuracy you want to get at this level. If you want full accuracy, then you can represent each turn, with each insulation. And if it leads to too complex modelling, you often simplify model it by using an equivalent region, keeping the ratio between copper faces, and insulation faces.

An example of the temperature color shade is given below after reaching steady state for Prius like motor.

With FluxTM FEA analysis, you can also study the thermal transient behaviour. You only need to know all the losses for each step of the cycle. An example of the temperature increase before reaching steady state is given in figure below.

It is possible to compare the temperature for the same working condition using the equivalent circuit method and Flux 2D for instance. We can see there is a good correlation between both methods.

New possibilities have arisen with new macros to reveal current supply required to follow a specific  thermal profile. Flux can do one computation, carry out a test and then decide to keep going or redo the current step with a new power value. A power supply limitation can also be added.

Another interesting feature is the ability to easily represent a cooling system with a shower, using formulae, including when the shower will appear. The graph shows the temperature fall with air or with a shower (for hardening purposes).

Temperature with air cooling or with shower cooling

What are the Flux advantages?

Since the beginning, Flux has offered numerous benefits:

Displaying of the magnetic flux isolines superimposed with the resulting temperature map.

Flux environment embeds an electrical circuit editor, including different type of sensors that can be positioned in the application in order to easily and precisely control the heating of the application.

Vincent Marché graduated first in electronics, and then went on to refine his skills at business school. After more than 10 years in the industry, working on product marketing and sales of sensors, switches and electronic devices, he fell into a melting pot called electrical engineering simulation. Supporting FluxTM electromagnetic simulation software since 2009, he is passionate about the large fields of applications addressed by simulation tools and the application expertise of the users. He is constantly looking for solutions that address the innovation needs of electrical engineers. Since the recent acquisition of Cedrat by Altair, he manages the promotion of electromagnetic applications, electrical engineering and e-Mobility.
View all posts by Vincent Marché »