Traditionally, noise and vibration problems are analyzed using the Modal Analysis approach. Vibration modes (or normal modes) are intrinsic ways a structure can sustain motion and carry energy. Each mode is typically associated with acharacteristic frequency and vibration shape, both of which provide important clues to the understanding of the dynamic behavior of the structure. Mathematically, the response of a structure can be expressed as a sum of contributions from its normal modes. This provides a convenient way to solve noise and vibration problems, since, in many cases, engineers can reduce the problems to a few dominant modes and seek to solve the problems by changing the modal frequencies or the mode shapes. However, in cases when there are too many modes, tens or thousands, that are contributing in similar amounts to the problem, this approach breaks down because it is not practical to track and change so many modes as a way to solve the problem. This typically happens in high frequency situations (> 100 Hz in the automotive industry).

Transfer Path Analysis (TPA) was developed as an alternative to the Modal Analysis approach for solving noise and vibration problems. It is a technique used to understand a noise or vibration response by breaking it down to contributions from internal or external load paths to identify which paths are dominating the response. Once the dominant paths are identified, the problem is reduced to understanding how to minimize the contribution of these paths. In comparison, the focus of this approach is on the transfer paths, as opposed to normal modes with the Modal Analysis approach. If one can define a limited set of transfer paths, TPA can be a more practical approach than Modal Analysis in solving high frequency problems. 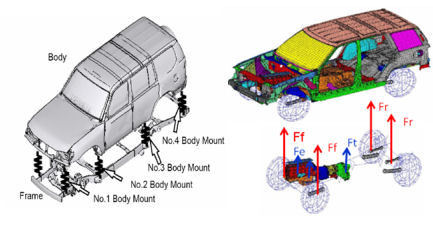 Since its initial development in the early ‘90s, TPA has been widely used as an effective tool for solving noise and vibration problems using experimentally obtained data. In general, however, this approach has not been broadly used as an analytical tool employing CAE-based data, even though there are a number of advantages to using CAE-generated for TPA. For example, it is easy to calculate forces directly in CAE, while direct measurement of forces is typically not possible.  It is also easy to calculate transfer functions from rotational inputs, while the same is difficult to do in testing. Given these advantages, analytically based TPA could be used much more often in practical problem-solving if a good CAE post-processing tool were made available. A HyperWorks TPA tool has been developed to meet this need.

Some of the key considerations for defining the transfer paths are:

For example, suspension and powertrain to body attachment points are good candidates to be defined as transfer paths.

In the TPA tool, transfer paths are managed as (attachment) points. Each degree of freedom at these points is a separate transfer path and can be given a multiple part description that will be used in post-processing.

Calculate attachment forces of the system in the assembled state

Once the transfer paths are defined, a control volume can be drawn that encloses the part of the system that can be called the receiver subsystem, while the part outside of the control becomes the source subsystem.

To ensure consistency of the forces with transfer function calculated in Step 2, grid point force output (GPFORCE) capability has been added in the RADIOSS solver for direct and modal frequency response solution sequences. This capability is unique to the RADIOSS solver.

Once the calculated forces are loaded into the TPA tool, the user can display and check forces through each path in the Force tab.

A separate run is performed including only the receiver subsystem which is enclosed in the control volume with unit inputs at each transfer path degree of freedom. This yields the transfer response functions.

These transfer functions can be displayed and checked in the TF tab of the TPA tool.

Optionally, the driving point (response at the same point as the input) mobility function can also be calculated in step 2 and can be displayed and checked in the PM tab of the TPA tool.

If the comparison looks good visually, the user can apply the TPA results for further analysis. If not, the user needs to check for mistakes in the first two steps that caused the mismatch.

What can you really get out of a TPA?

Once the TPA analysis is completed, contributions from the various transfer paths can be ranked, and the ones that dominate the noise or vibration response can be identified. In addition, transfer function, input force and point mobility can be ranked in the same order to further understand which factor was the main cause of the high contribution.

If transfer function is high, relative to each other or to generic targets

If force is high

If local point mobility is high

The example plots above were taken from an engine torque sensitivity analysis using a full vehicle NVH model built by Altair from public domain data for the Ford Taurus. In this example, a constant (over the frequency range) torque was applied to the engine crankshaft, simulating fluctuations in combustion torque during acceleration, while an equal and opposite torque was applied to the engine block, simulating the net reactive forces from the engine mounts.

Given that this is an engine loadcase, most would have expected the engine mounts to be the key transfer paths. But the TPA results revealed that, in reality, the front lower control arm (LCA) forward bushing and the steering gear to subframe mount are the dominating transfer paths. This is because the applied engine torque gets transferred to the halfshafts, which in turn drive the front wheels rocking back and forth, and the wheel motion is reacted mostly by the LCA bushing and the steering gear mount, in the fore-aft direction.

The high contributions can be attributed to both high forces and high transfer functions. Typical fixes include suspension bushing tuning, as well as halfshaft diameter and transmission internal shaft and clutch damper stiffness and damping tunings.

The HyperWorks TPA tool has also been designed to have the capability to aggregate path contributions to the component or subsystem level. The plot below shows that, in aggregate, contributions are all coming from the front suspension, while the engine mounts and the rear suspension have a slightly negative (or out-of-phase) contribution.

TPA is an important tool for noise and vibration diagnostics. It can provide a wealth of information that helps engineers understand the root cause of and identify fixes for noise and vibration issues. There are several advantages to performing TPA using analytical processes and tools. HyperWorks has unique and full-featured capabilities for setting up the TPA runs, generating results needed to perform TPA, and post-processing data to gain the many benefits of using the TPA approach.