Simple equations are presented to help understand the appearance of grating lobes in connection with PBC simulations in FEKO.

The purpose of this article is to discuss grating lobes in connection with periodic boundary conditions (PBC) in FEKO. Simple equations are derived to determine the frequency where grating lobes start to form, as well as the grating lobe observation angles in the far-field.  These equations are verified by means of a Jerusalem-cross frequency selective surface (FSS) example.  The effect of grating lobes on the computation of the reflection and transmission coefficients will also be shown.

In order to derive these equations, consider the infinite one dimensional array shown in Figure 1 (similar for 2-D). The element spacing is d and the incident plane wave excitation is at an angle θi. We are interested in the far-field at the observation angle  θ.  The PBC assumes that the current distributions on all array elements are identical (except for the phase increment).  To compute the far-field we sum the contribution of all the elements to obtain:

with the wave number k=2π/λ, the phase term above is:

Therefore, in the far-field we will have in phase radiation at the observation angles:

Looking at this last equation, some important properties can be seen:

Two more equations can be derived from the above equations at the onset of grating lobes.

Consider the Jerusalem-cross FSS [3] with the unit cell shown in Figure 2. This example is used to verify the predicted frequency where grating lobes start to form, as well as the predicted observation angles for the main beams and grating lobes in the far-field. The influence of grating lobes on the computation of the reflection and transmission coefficients will also be shown.

Parameters of interest: plane wave excitation in the xz-plane with incident angle θi=30°, and square 2-D periodic lattice with element spacing d = 15.2 mm. The dimensions of the FSS can be found in [3].

To validate the predicted observation angles for the main beams and grating lobes, the far-field radiation pattern of a large finite 51×51 FSS array was analyzed in FEKO using the PBC.  This was done at the frequencies f = 13.0 GHz, 13.5 GHz and 14.0 GHz as shown in Figures 3-5.  A cut in the xz-plane of the far-field pattern is superimposed on the FSS unit cell in all these figures.  The predicted main beam angles are identical to those computed at θ = 30°,150°.  Predicted grating lobe angles are within 0.6° at 13.5 GHz and within 0.3° at 14.0 GHz of the computed angles.

Figure 6: Near-field along
the negative z-axis

Figure 7 shows the computed reflection and transmission coefficients of the FSS versus frequency.  The near-fields are computed at two single observation points at z = ±0.1 m.  As mentioned previously, these results are only valid for frequencies up to 13.2 GHz (before the onset of grating lobes) where a small spike can be seen.  The rapid variation at 9.4 GHz is correct (this is not a grating lobe) and was verified by using the multilevel-fast-multipole method to analyze the complete finite array.  Also shown in Figure 8 is the reflection coefficient for a normal incident plane wave.  Good agreement between FEKO and the published results can be seen.  The PBC analyses show that the performance of the Jerusalem-cross FSS degrades for θi =30° incidence around 9.4 GHz.

Figure 7: Reflection and transmission coefficients for θi = 30° (only valid below 13.2 GHz) 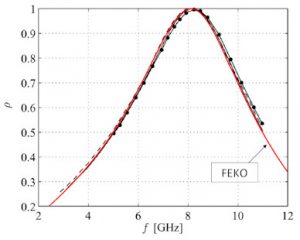