A wide-band stacked annular-ring dielectric resonator antenna is modelled efficiently with the FEM/MOM and 2 planes of magnetic symmetry.

The geometry of the antenna is shown below. 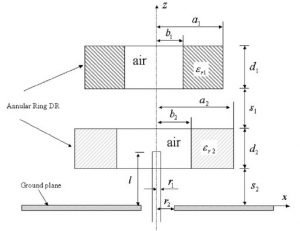 The geometry is constructed in CADFEKO using mainly cylinders of different sizes subtracted from each other as well as circular ellipsoids. As the FEM/MoM is used, a dielectric “air” layer is created that surrounds the antenna. The permittivity of this dielectric is set to 1 and serves to reduce the computational resources as a result of the coarser surface triangles as compared to those of the dielectrics in the intended model.

A FEM modal source is used as the excitation. The end of a coaxial connector is constructed using dimensions consistent with an air dielectric in 50 Ohm coax.

The mesh size was set to Standard and the Refinement factor and Minimum element size were modified to obtain an accurate mesh representation of of the model.

The FEM modal source and frequency loop using continuous sampling is set in CADFEKO and the model is saved after meshing.  Magnetic symmetry is added on planes X=0 and Y=0.

The results for S11 for a FEM modal port  and reference [1] are given below. For comparison purposes, the results for the model with a FEM current source, are also included. 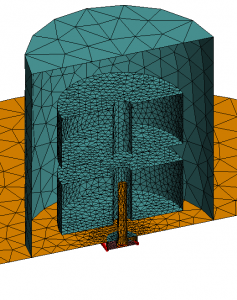 (a) Geometry of FEM/MoM model in POSTFEKO 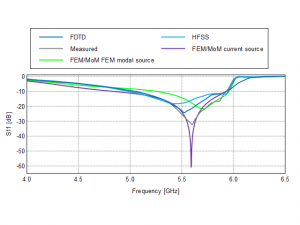 (b) S11 results comparing the FEM/MoM with reference [1]

As a matter of interest the SEP model is briefly discussed.

The following points are important for setting up the SEP model:

The final SEP model with a waveguide port is shown below. The comparative results between the SEP and reference [1] are also shown. 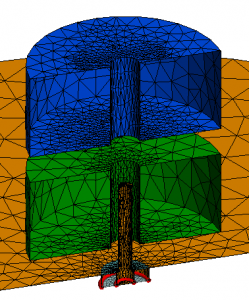 (a) Geometry of SEP model in POSTFEKO 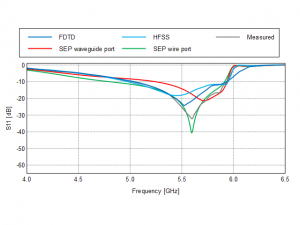 (b) S11 results comparing the SEP with reference [1]

The computational resources for the FEM/MoM and SEP is compared in the table below. Results were obtained on a Intel(R) Core(TM)2 Quad CPU Q9550 @ 2.83 GHz with 8 GB RAM. Simulation was run parallel using three cores.

It is seen that the FEM/MoM is equally efficient, yet equally accurate technique for solving this problem.